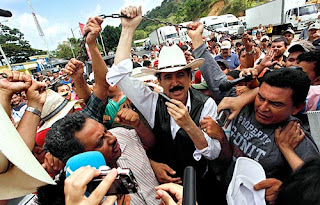 LAS MANOS, Nicaragua (CNN) - Ousted Honduran President Jose Manuel Zelaya returned to Nicaragua late Friday night after briefly entering his home country from which he was removed in a military coup nearly a month ago. In a purely symbolic move, Manuel Zelaya crosses the border with Nicaragua but stays only about 30 minutes. He decided to go after crisis-resolution talks broke down. The Honduran government said it would arrest Zelaya if he pushed further into the nation and would ask the International Red Cross to monitor his treatment. Provisional President Roberto Micheletti, who was sworn in hours after Zelaya was removed from office on June 28, said Friday night his country was willing to continue negotiations. Micheletti said Zelaya had no intention of returning to Honduras, where he faced certain arrest by the national police.

Zelaya went back to Nicaragua, and provisional President Micheletti said Zelalya will keep causing problems. "We have received information that they want to continue with these type of actions that only incite the public," he said. In his trademark white cowboy hat and a black leather vest, Zelaya drove a white Jeep from the northern Nicaraguan city of Esteli to the border, ahead of a long motorcade. At the Las Manos crossing, he waded through a phalanx of television cameras and loudly chanting supporters, giving one interview after another on his cellphone."Allow me to return to my country," Zelaya said, directly addressing his nation's police and army. "To embrace my fellow countrymen, my children, my wife, my mother."

Honduran police and soldiers set up numerous roadblocks between Tegucigalpa, the capital of Honduras, and the border, and established an immediate curfew in the area until 4:30 a.m. Zelaya supporters surged toward the blockade. Shootings came and troops fired tear gas in an effort to disperse the crowd. No serious injuries were reported.

WHAT DO THE VEDIC TEACHINGS TELL US?
In the modern setup of the democratic states, the people themselves are fallen to the qualities of the śūdras or less, and the government is run by their representative, who is ignorant of the scriptural mode of administrative education. Thus the whole atmosphere is surcharged with śūdra qualities, manifested by lust and avarice. Such administrators quarrel every day among themselves. The cabinet of ministers changes often due to party and group selfishness. Everyone wants to exploit the state resources till he dies. No one retires from political life unless forced to do so. How can such low-grade men do good to the people? The result is corruption, intrigue and hypocrisy. They should learn from the Śrīmad-Bhāgavatam how ideal the administrators must be before they can be given charge of different posts.