BOMBS OUTSIDE MOSQUES
IN BAGHDAD KILL AT LEAST 30 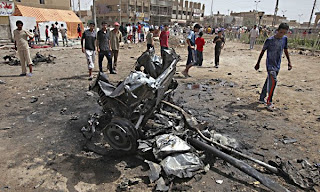 BAGHDAD — Bombs exploded near five Shiite mosques around Baghdad within 45 minutes on Friday as worshipers attended prayer services, killing at least 30 people in what appeared to be a coordinated attack against followers of the anti-American cleric Moktada al-Sadr, Iraqi officials and a Sadr aide said. The bombs, which the police said were hidden just outside the mosques, tore through the Friday calm in five predominantly Shiite working-class neighborhoods, three of them on the east side of the city, one in the south and one in the north. A total of 136 people were reported wounded in the attacks, according an official from the Interior Ministry who spoke under customary condition of anonymity.

Officials said that highest death toll was outside the Shuroofi mosque in the north, in the district of Shaab. Once controlled by a militia loyal to Mr. Sadr, the mosque had in recent years been taken over by the national police, so Sadr loyalists pray outside in the street. Initial reports indicated that 23 people died in the attack and 107 were wounded. Shortly after the bombing, prayer mats, beads, shoes and umbrellas used for shade from the midday sun were scattered along the street. Women wailed. Witnesses said the explosion had been caused by a bomb hidden in a parked car on a road where several hundred people had gathered to pray. A young witness said “It was a horrific scene,” “People lost their limbs, and some had their faces blown off. I haven’t seen anything like this.”

The second most deadly bombing Friday took place at Al Rasool Mosque in the Diyala Bridge neighborhood of east Baghdad. Five people died when two bombs exploded in quick succession there, and 15 were wounded. While there have been numerous attacks on Shiite pilgrims in Baghdad and in predominantly Shiite marketplaces, attacks on the city’s mosques have been infrequent in recent months. Although violence has declined significantly since the worst of Iraq’s sectarian conflict in 2006 and 2007, attacks continue almost daily against Iraqi forces, and an intermittent pattern of major attacks continues to wreak havoc, often aimed at civilians in markets and other public places.

WHAT DO THE VEDIC TEACHINGS TELL US?
The body is not the self; we are different from the body, and therefore there is no question of friends, enemies or responsibilities in terms of the bodily conception of life. One should not be very anxious about the body's changing from childhood to boyhood, from boyhood to old age and then to apparent annihilation. Rather, one should be very seriously concerned about the soul within the body and how to release the soul from the material clutches. The living entity within the body is never annihilated; therefore one should surely know that whether one has many friends or many enemies, his friends cannot help him, and his enemies cannot do him any harm. One should know that he is a spirit soul (aham brahmāsmi) and that the constitutional position of the soul is unaffected by the changes of the body. In all circumstances, everyone, as a spirit soul, must be a devotee of Lord Visnu and should not be concerned with bodily relationships, whether with friends or with enemies. One should know that neither we ourselves nor our enemies in the bodily conception of life are ever killed.
Srila A.C. BV Swami Prabhupada:
"Srimad Bhagavatam - Purport in Canto 6 - Chapter 10 - Verse 32"
Publicado por dasavatara das en 5:14 PM