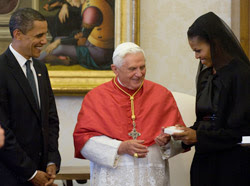 VATICAN CITY – Pope Benedict XVI stressed the church's opposition to abortion and stem cell research in his first meeting with President Barack Obama on Friday, pressing the Vatican's case with the U.S. leader who is already under fire on those issues from some conservative Catholics and bishops back home. The 30-minute meeting Vatican audience was described by both sides as positive — constructive talks between two men who agree on helping the poor and pushing for Middle East peace but disagree on what the Vatican considers prime ethical issues.

"It's a great honor," Obama said, greeting the pope and thanking him for this first meeting.Afterward, the Vatican said the leaders discussed immigration, the Middle East peace process and aid to developing nations. But the Vatican's statement also underscored the pair's deep disagreement on abortion. Even in his gift to the U.S. leader, the pope sought to underscore his beliefs. Benedict gave Obama a copy of a Vatican document on bioethics that hardened the church's opposition to using embryos for stem cell research, cloning and in-vitro fertilization. Obama supports stem cell research. "Yes, this is what we had talked about," Obama said, telling the pope he would read it on the flight to his next stop, Ghana. Earlier, the pope's secretary, the Rev. Georg Ganswein, told reporters the document would "help the president better understand the position of the Catholic church."

Denis McDonough, a deputy White House national security aide, said of the pope and Obama, "They discussed a range of those issues, and I think the president was eager to listen to the Holy Father." He said Obama was "eager to find common ground on these issues and to work aggressively to do that." Bu he said there may be some issues on which they can't agree. In an interview with Catholic journalists before meeting the pope, Obama said he would tell Benedict of his concern that the global financial crisis not be "borne disproportionally by the most poor and vulnerable countries." Just this week, Benedict issued a major document calling for a new world financial order guided by ethics and a search for the common good, denouncing a profit-at-all-cost mentality blamed for the global financial meltdown.

Obama's wife, Michelle, joined him at the end of the meeting with Benedict, and gifts were exchanged. Daughters Malia and Sasha, who accompanied their parents on the trip, also met the pope. Obama gave Benedict a letter from Sen. Edward Kennedy, who was diagnosed a year ago with brain cancer. McDonough said Obama asked the pope to pray for Kennedy, a member of one of the United States' most prominent Roman Catholic families and a politically ally of the president.

WHAT DO THE VEDIC TEACHINGS TELL US?
The distinction between human being and animal is that the animal has no faith, but in human society there is a kind of faith, either it is Christian faith or Hindu faith or Buddhist faith or Muhammadan faith. But when we give up this faith, then our position is just like animal. And the present society is just like animals. … They are simply after sense enjoyment. That's all. Don't you see? The Pope says that it is not good; it is not God's law, that you should use contraceptive method. But they are so mad after sense enjoyment, they say, "Oh, we don't care for your instruction." Just see how much they have lost their faith.

So at the present moment it is very difficult position, no faith at all. Simply people have faith in sense gratification. … And therefore they are denying the topmost head of Catholic Church, "We don't care for your instruction," because they have become faithless. That's all. … Everywhere, not only in the Christian world. In the Hindu, in Christian, they don't care for any rules and regulations any more. But they profess that "I am Christian," "I am Hindu," "I am Muhammadan."
Srila A.C. BV Swami Prabhupada:
"Lecture on The Srimad-Bhagavatam – Canto 7, Chapter 9, Verse 10"
(This lecture was given in Montreal – Canada, on July 10, 1968)
Publicado por dasavatara das en 5:27 PM