FOR YOGA MASTER AT 92,
THERE IS ONLY THE DANCE 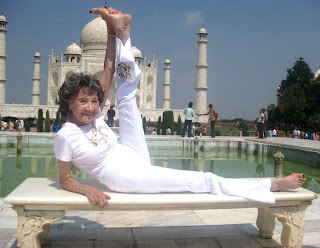 NEW YORK (Reuters) - Yoga master Tao Porchon-Lynch, 92 years young, kept repeating her life’s motto, there is nothing you cannot do, before a packed workshop in New York City. Then, light as a bird, she glided into a gravity-defying arm balance to illustrate the point. “I haven’t been able to do the peacock since I broke my wrist in April, but I did it in that room,” Porchon-Lynch said of the pose she demonstrated recently at Strala Yoga studio. “In yoga every breath I take puts me on the right path.” Porchon-Lynch has been practicing yoga, the ancient discipline connecting breath to movement, for over 70 years. Along the way she has walked with Mahatma Gandhi, modeled couture in Paris, trod the boards in London, and acted under contract to MGM in Hollywood. It was yoga breathing, she said, that kept fear at bay when she worked for the resistance in World War Two France.

Born in Pondicherry, India, Porchon-Lynch studied under yoga legends B.K.S. Iyengar and Indra Devi. At age 50 she was given her first paying yoga job in the United States by fitness icon Jack LaLane. Porchon-Lynch founded the Westchester Institute of Yoga, where she is director, in 1982. Jane Fonda is her admirer. Porchon-Lynch teaches up to 20 hours a week and has trained over 300 instructors, and when she’s not teaching, she pursues another passion - competitive ballroom dancing. “Dancing is a continuation of yoga, like music,” she said. “Music and dancing and yoga are all coming from within you.”

Yoga Master Porchon-Lynch says her "most precious inspirations" come when people think they can't do something, "then there's a smile on their face, because they can." Despite a hip replacement, she recently completed a 17-dance event where, she says her Tango partner was a 22-year old and her Cha Cha partner was 29. Yoga helps us create a life where we're looking down from clouds instead of into the clouds," she says. "I call Yoga the dance of life, since I'm always dancing." Tara Stiles, owner of Strala Yoga, says Porchon-Lynch is living proof that yoga actually works. There is no doubt that Hatha Yoga enhances health, improves the quality of life and keeps young spirit, and this is an example. 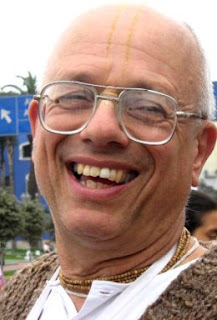 Yoga is the most beautiful science, the highest art. Everything in our life should be yoga, since this word refers to the way of life by which one is in constant harmony with the whole, the universe, which beats at the rhythm of our hearts. Yoga is the art in every business. Yoga adds full meaning to our lives, it heals and makes us happy, it strengthens and makes us to become supporter for others. Yoga is deep, essential and mystic, and it can be practiced by everyone; there is no age limit or any disease that prevents its benefits. ... Yoga fell from higher planes, it was revealed by the devas (gods) and the great rishis (sages) and reveals the mysteries of the body and mind. ... The science of yoga is generously opening the doors towards a world of greater harmony. Yoga is a friend in good and bad times; its practice will help us to grasp the proper teaching from every single fact of life, so that everything makes sense. Yoga will help us to move towards perfection, the ultimate goal. 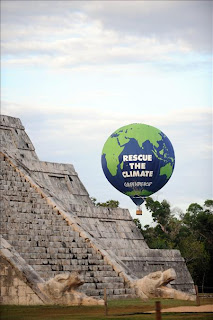 CANCUN, Mexico (AP) - World governments begin another attempt Monday to overcome the disconnect between rich and poor nations on fighting global warming, with evidence mounting that the Earth’s climate already is changing in ways that will affect both sides of the wealth divide. During two weeks of talks, the 193-nation U.N. conference hopes to conclude agreements that will clear the way to mobilize billions of dollars for developing countries and give them green technology to help them shift from fossil fuels affecting climate change. After a disappointing summit last year in Copenhagen, no hope remains of reaching an overarching deal this year setting legal limits on how many major countries would be allowed to pollute. Such an accord was meant to describe a path toward slashing greenhouse gas emissions by mid-century, when scientists say they should be half of today’s levels.
Eighty-five countries have made specific pledges to reduce emissions or constrain their growth, but those promises amount to far less than required to keep temperatures from rising to potentially dangerous levels. The U.N. scientific body that won the 2007 Nobel Peace Prize for its climate change report, which called global warming “unequivocal” and almost certainly caused by human activity, is expected to tell the conference its findings and warnings of potential disasters are hopelessly out of date. Agronomists are due to report on shifting weather patterns that are destabilizing the world’s food supply and access to clean water, and that could lead to mass migrations as farmers flee drought or flood-prone regions.

In this new summit, attention will focus again on the United States and China, key protagonists representing the industrialized and developing world. The U.S. has insisted that they limit their pollution only if China does too. China, now the world’s biggest polluter but also the biggest investor in renewable energy, rejects international limits, saying it still needs to overcome widespread poverty and bears no historic responsibility for the problem. They keep blaming each other, but the solution can not be reached in this way. They should accept their responsibilities, admit their faults and abide by the rules given by the Supreme Lord, who is the real owner, not only of this planet, but of the entire universe. 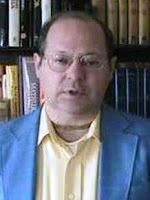 In all the inventions or devices we produce, all the ingredients and resources that we use are all given by God. The elements we need to make big buildings, bridges, ships, cars, or the fuel to operate them, are all being given by God, and we need to show the proper respect. To think we are the proprietors of everything is the illusion. It is our pride that makes us think we are so intelligent when actually the very brain with which we think is not created by us but has again been given by God. As everything is created from the Supreme Creator, then we should certainly have a high regard for everything as the expansion of God’s energies. ... A person who sees the whole world as the energy of the Supreme Being is indeed a great sage of wisdom. Therefore, we should care for the environment as if it is not ours but God’s property, and in this way assure ourselves that it will continue to provide all of our necessities for many years to come, and into many future generations. This is the Vedic view.