Vatican City (CNA/EWTN News) - Faith in God’s unending love does not take away the struggle for a decent life, but it does liberate men and women from the things of this world and fear of the future, said Pope Benedict XVI from St. Peter’s Square.  The Sunday Angelus prayer brought many pilgrims and Romans out to the square under the Pope’s studio window.  In his pre-Angelus message, the Pope called Sunday’s readings some of the most “touching” in the Bible.  “He who believes in God ... puts the search for his kingdom and his will in the first position,” commented the pontiff, calling this attitude “precisely the opposite of fatalism.”  “Faith in providence, in fact, does not dispense one of the difficult struggle for a decent life, but liberates from the anxiety for things and the fear of tomorrow,” he added.  This invitation to have confidence in God’s steadfast love is also present in the Gospel reading from Matthew, said Benedict.

Jesus exhorts his disciples to place their faith in the same providence that feeds the birds of the sky, “clothes” the wild flowers in the field and “knows man’s necessities,” the Pope recounted. The Lord tells the disciples, “do not worry and say, ‘What are we to eat?’ or ‘What are we to drink?’ or ‘What are we to wear?’ All these things the pagans seek. Your heavenly Father knows that you need them all.”  Pope Benedict said that this discourse “could seem unrealistic, if not evasive” in light of the misery in which some people live. “In reality,” he explained, “the Lord wants to make it clearly understood that you cannot serve two masters: God and riches.”

Although Jesus’ teaching is “clear and valid for all,” it can be practiced in a variety of ways depending on one’s vocation, continued the Pope. The Franciscan friar follows these words “more radically,” for example, while the father of a family has the duty of providing for his wife and children.  “In any case, though, the Christian is distinguished by absolute trust in the Heavenly Father, as it was for Jesus,” concluded the Pope.  Develop a steadfast trust in God and render loving service to Him is essential.  Despite their different worldly responsibilities they have to fulfill, a married devotee (grhasthas) or a single devotee (brahmachari), both should try to do their best for God. 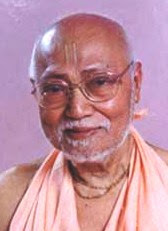 “What is the duty of grhasthas like us? How should we perform hari-bhajan?” Srila Guru Maharaja went on to say that many married persons ask him questions about this subject. ... Addressing such grhasthas, Srila Guru Maharaja said, “Let’s assume you have many things to do and are always engaged in some or the other work. Don’t you take some time off to eat while engaged in work? You eat in the morning, you take lunch, and then you take dinner. Some people even eat in the evening.  We have so many things to do and yet we find time to eat 3 or 4 times a day. Why? Because we have understood the importance of eating. We know that if we don’t eat, our bodies will become weak. However, we have not understood the importance of hari-bhajan. That is why we are not able to find time for it.” ... When we understand the importance of hari-bhajan, we will also find some time for it.