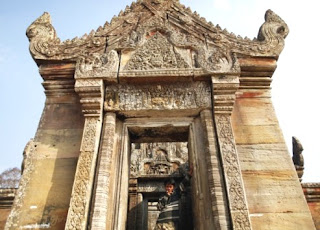 Preah Vihear (AP) - High on a cliff overlooking the jungles of northern Cambodia, heavily armed troops crouch in fortified bunkers on the grounds of an ancient temple turned modern-day battlefield. The stone remains of Preah Vihear, built nearly 1,000 years ago, are supposed to be a protected U.N. World Heritage site. Instead they are at the heart of a dangerous tug-of-war between Cambodia and Thailand - one that has taken at least eight lives and forced 15,000 to flee in four days of clashes recently. The battle over a hilly patch of land in this remote countryside is rooted in a decades-old border dispute that has fueled nationalist passions and been driven by domestic politics and conspiracy theories on both sides. A fragile truce has held since Monday night, but the dispute remains unsettled, and troops are digging in for another round of combat.

The Cambodians filled fresh sandbags earlier this week, stacking them meticulously in 10 bunkers along one of the temple’s low outer walls. With ornamental panels dedicated to the Hindu deity Shiva, Preah Vihear was a stunning achievement of the Angkorean empire, whose realm once took in parts of modern-day Thailand and Vietnam. When the latest firing stopped, the great stone temple itself stood as a silent victim, small chunks of its darkened gray walls blown off by shrapnel from shells fired from Thailand. In 1962, the International Court of Justice ruled the cliff-top structure was inside Cambodia. However, sovereignty of the land surrounding it - an area less than five square kilometers - has never been resolved.

The 11th century Preah Vihear Hindu temple complex in honour to Shiva is one of the most celebrated example of ancient Khmer architecture. It has been the subject of an intense boundary dispute since French colonial forces withdrew from Cambodia in the 1950s. UNESCO would send a mission to assess the situation, but Thailand opposes the visit, saying it will make the situation worse. Even if there is no more combat, the presence of the Cambodian army, which has patrolled the temple complex for at least two years, risks degrading the site further. Nowadays, monks pray and soldiers smoke cigarettes at the old temple at the heart of Thailand and Cambodia’s deadly border clashes, but nobody dares predict the conflict is over.

High atop the Dangrek Mountain range in North Central Cambodia lays a temple of such splendor that it was finally selected as a World Heritage monument by the World Heritage Committee in 2008. This mountain temple, dedicated to Lord Shiva, is known as Shikhareshvara (Lord of the Peak). ... Sahai (the author) explains in great detail why the artisans have carved images from Indian mythology. Sahai’s focus finally reaches the top most temple where Lord Shiva is seen dancing his eternal dance on the head of an elephant. ... The cosmology of the early Indian sages was carefully incorporated into every aspect of the architectural design of Preah Vihear and with a tireless uncovering of all the inscriptions … Sahai has brought to life the true purpose of this ancient Khmer temple providing a beacon of light so all the world can see the glory of Lord Shiva with a hope of peace and prosperity to once again reign in the Dangrek region.