http://elpais.com - In Tlacotalpan, Veracruz, local ranchers donate their working bulls for a religious festival. The animals are first dragged through a nearby river and afterwards beaten by local residents - many of whom are inebriated - as they climb back on to the riverbank. The bulls in Tlacotalpan are not raised to fight or run - they live peacefully in the fields, and when the time comes their meat is used to feed the hungry.
But every year six elderly, tired bulls, donated by their owners, are sacrificed during during the celebrations of the feast of the Vírgen de La Candelaria. The popular annual event in this town of 8,000 residents has angered many animal rights groups.

The bulls are forced to cross the river before being beaten by spectators. At the other side of the river the townspeople wait for them. Hundreds pull the bulls out of the water using a rope. They expect the massive animals to run after the spectators, but the bulls can’t or won’t. Unlike fighting bulls, the breed in question is docile and, they are usually already exhausted and can hardly move by the time they arrive at the festivities. Some of the bulls arrive on the riverbank bleeding from the nose. In past years, some of them have drowned in the river.
But animal rights organizations believe that these rules do not go far enough. “[The cruelty] should be prohibited and eradicated from our society, especially from religious festivals, which should instead focus on teaching people positive values,” reads a joint statement issued by AnimaNaturalis México, PATAS, and Project ARPA.

This violent tradition takes place in the state of Veracruz, Mexico; the article is written by Elena Reina Muñoz. Many voices from protectionist groups have risen to condemn these traditions. Since 2014, municipality of Tlacotalpan had to enact a regulation under pressure from animal rights organizations and the Ministry of Environment for the abuse were not so blatant. But unfortunately things remain the same. The mayor, Homero Gamboa, has acknowledged: “Despite awareness campaigns about the care of the bull, many attendees flout the rules and try to hit the animals.” This is another example of man's cruelty to animals, but why are there people who enjoy torturing the defenseless? Our spiritual masters have taught us that is due to a greater or lesser degree the consciousness is covered. As their consciousness is said to be retracted, animals can not search to find God. Only conditioned souls in human bodies can search and love God. Among people there are different stages: those who are in the stage of budding consciousness; those who practice devotional service (sadhana-bhakti), situated in the stage of blossoming consciousness; and those who have already reached the love of God (bhava-bhakti), situated in the stage of fully blossomed consciousness. As human beings we have already reached an auspicious condition of life, so we should act accordingly protecting our younger siblings (the animals). We should improve our state of consciousness, change our materialistic view of life and help our neighbors to do the same. We should be concerned, not only in our individual advancement, but also be ready to collaborate in the task of raising consciousness in others and walk with them along the path of goodness. (Editor's note). 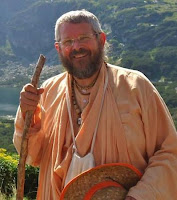 [...] We must constantly work to raise our consciousness, which is the potential that God gave rational beings like us. The initial and most basic step to enter into this platform is to stop harming others for personal benefit or gain. And for this, it is essential to become sensitive to animals and stop mistreating them only for our sense gratification. At that time we will be able to enter into the area of universal respect and love between beings. A feature of those who want to change the world is that they feel constantly that life is a bliss [...]. Those who possess this ability should share it with others and educate people in such values, because when consciousness is shared, it is possible together to begin to understand the philosophy of love: then it becomes an endless bliss.