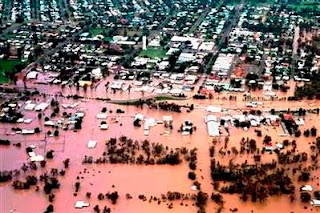 SYDNEY (Reuters) - Floodwater rose across a vast area in Australia’s northeast on Friday, inundating 22 towns, forcing 200,000 residents out of their homes, and closing a major sugar export port. Flooding has already shut coal mines in Queensland state and its biggest coal export port, forcing miners such as Anglo American and Rio Tinto to slow or halt operations. The worst flooding in about 50 years has been caused by a “La Nina” weather pattern, which cools waters in the eastern Pacific and has produced torrential rain over the past two weeks across northeast Australia. In the southern states of Victoria and South Australia, meanwhile, soaring temperatures and tinder dry conditions have sparked bushfires. Authorities warned of possible “catastrophic” fires if conditions worsened and holiday travelers were asked to prepare evacuation plans.

Firefighters, helped by cooler temperatures, contained small fires late on Friday, but meteorologists said readings could soar again above 40 degrees Celsius (104 degrees Fahrenheit) in the next few days. In Queensland, authorities warned of rising health risks from floodwaters, along with the danger of crocodiles and snakes in flooded homes. Prime Minister Julia Gillard toured the sugar city of Bundaberg, which closed its port on Friday after flood debris was washed downstream into shipping channels and damaged navigation beacons. Emergency authorities in Queensland said the flooding was not expected to reach a peak in some areas until Sunday and would not recede for at least a week.

According to authorities, Australia has endured its wettest spring on record, causing six river systems to flood. The inland sea stretched across Queensland is dotted with the roofs of flooded homes, islands of dry ground crowded with stranded livestock and small boats ferrying people and emergency supplies. This bleak and desolate view is constantly repeated in different parts of the world. Climate change caused by human unscrupulousness, their insatiable industries and global meat consumption, affects the whole planet without distinction. One effective strategy for reducing global warming is to advocate a vegetarian diet. 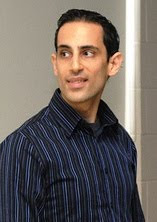 The environmental community rightly recognizes global warming as one of the gravest threats to the planet. The expected consequences include coastal flooding, increases in extreme weather, spreading disease, and mass extinctions. Yet by focusing entirely on carbon dioxide emissions, major environmental organizations have failed to account for published data showing that other gases are the main culprits behind the global warming we see today. ... Animal agriculture produces more than 100 million tons of methane a year. And this source is on the rise. About 85% of this methane is produced in the digestive processes of livestock, and while a single cow releases a relatively small amount of methane, the collective effect on the environment of the hundreds of millions of livestock animals worldwide is enormous. ... Simply by going vegetarian we can eliminate one of the major sources of emissions of methane, the greenhouse gas responsible for almost half of the global warming impacting the planet today. 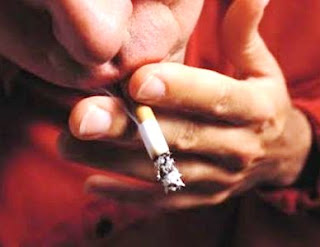 www.webmd.com - A new study shows that smokers who continue to light up after being diagnosed with cancer may experience more pain and more pain-related disruption in their daily lives, compared to nonsmokers. In the study, researchers compared smoking status and pain levels of 224 cancer patients about to start chemotherapy. The participants answered questions about their pain severity, pain-related distress, and pain-related interference in their daily lives. The results showed that current smokers reported higher levels of pain and also appeared to be more bothered by their cancer pain than people who had never smoked. There is also an inverse relationship between cancer pain severity and the number of years since quitting smoking. Cancer pain decreased the longer it had been since they stopped smoking.

“Patients who continued to smoke despite their cancer diagnoses reported greater interference from pain than either former smokers or never smokers,” wrote researcher Joseph W. Ditre, PhD, of the department of psychology at Texas A&M University in the journal Pain. Researchers say the findings suggest that quitting smoking may reduce cancer pain over time. “Although more research is needed to understand the mechanisms that relate nicotine to pain, physicians should aggressively promote smoking cessation among cancer patients,” Lori A. Bastian of Duke University writes in an editorial that accompanies the study. “Preliminary findings suggest that smoking cessation will improve the overall treatment response and quality of life.”

Patients with cancer who continue to smoke despite their diagnosis experience greater pain severity than their counterparts who quit or who have never smoked. Continued smoking has been associated with an increased risk of developing a second primary tumor, it reduces the effectiveness of treatment, and it is associated with poorer survival rates. Smoking is already known to greatly contribute to a person’s risk of developing cancer, but this study suggests that smoking may also worse the pain in people with this illness. If you have trouble quitting, this news can help you decide to do so. Quit smoking!.

My father told me when he was young, nobody had any idea that cigarettes were bad. It was fashionable to smoke cigarettes. One movie star always had a cigarette hanging out of his mouth. The way he did it the whole of America was trying to imitate. He was such a sex symbol and such a handsome heroic person. His style became the fashion. ... but he died of cancer of the lips. One of the most famous singers would sing while smoking a cigarette. How can you smoke when you are singing! It was amazing ... he died of cancer of the lungs only when he was forty. So doctors began coming out and saying, ‘Cigarettes are going to kill you. Stop Smoking!’ When that message came out cigarette smoking became more popular among the young people. Because they are trying to prove to themselves, “I am daring. I am fearless. I don’t care if I am risking my life. I am going to do it to be cool. Yes I know it will kill me.” It’s so foolish. It’s just the example of mentality of material existence. We are not willing to listen to good advice.