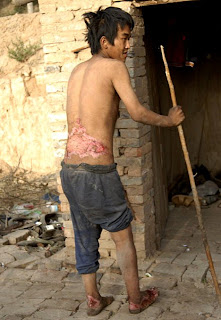 BEIJING (AFP) - Authorities have shut down a factory in western China where 11 workers, most of them mentally disabled, were allegedly enslaved for years in deplorable conditions, state press said Tuesday. The case, the latest example of labour abuse in the vast country, comes three years after the eruption of a major slavery scandal in which thousands of workers were found to have been forced to work in brick kilns. In the western Xinjiang region, the 11 workers at a building materials plant put in long hours, suffered regular beatings and were given the same food as the dogs, the Beijing News said. None of those employed at the Jiaersi Green Construction Material Chemical Factory were ever paid, the report said. Some of them had been working for up to four years. Workers attempting to flee the factory were routinely beaten, the paper said.

According to factory owner Li Xinglin, the workers were legally contracted to work at the facility by an aid agency for the disabled based in Sichuan province, the paper said. The agency was not officially registered in Sichuan, the report said, adding that police have issued an arrest warrant for the founder of the organisation, who remains at large. In 2007, thousands of people were forced to work in brick kilns in the provinces of Henan and Shanxi, where they were subjected to regular beatings and near-starvation diets. Although no official numbers have been reported on how many were enslaved, some 53,000 migrant workers had been employed in more than 2,000 illegal brick kilns in Shanxi alone. Similar cases of slavery have been reported sporadically around China.

These workers - including mentally ill people - were sold to a building materials factory to work without pay and they were given no protective gear and ate the same food as the factory leader's dogs. These people were treated as slaves. Similarly, we (the spiritual soul) we are like slaves in this material world. The soul in its conditioned state perpetually travels through time and space, and is in a state of slavery that forces it to come back to this material world again and again. We must understand the science of reincarnation to free ourselves and return to the antimaterial regions of knowledge, bliss, and eternity.

Activities of sense gratification, meant only to please one’s mind and senses, are the cause of material bondage, and as long as one engages in such fruitive activities, the soul is sure to continually transmigrate from species to species. Lord Rsabhadeva, an incarnation of Krishna, warned, “People are mad after sense gratification. When a person considers sense gratification the aim of life, he certainly becomes mad after materialistic living and engages in all kinds of sinful activity.” But becoming free from the cycle of birth and death requires more than just theoretical understanding. One must act on the platform of spirit soul. ... When the living entity is covered by the mode of ignorance, he does not understand the individual living being and the supreme living being, and his mind is subjugated to fruitive activity. ... Therefore, in order to free ourselves from the endless repetition of birth and death, we must understand the laws of karma and reincarnation.