INDIA PAID HOMAGE TO GANDHIJI
ON HIS 63RD DEATH ANNIVERSARY 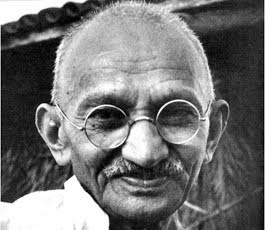 www.forestlaneshul.com - Nation remembered father of Nation, Mahatma Gandhi on his 63rd death anniversary and to mark the sacredness of this day a series of functions are being organized all across the country. People from all walks of life paid homage to the Father of the Nation, Mahatma Gandhi on his 63rd death anniversary which is observed as Martyrs’ Day. To mark the occasion, in National capital, a march against the corruption will be taken out. Eminent people such as Kiran Bedi, RTI activist Arvind Kejriwal, Sri Sri Ravi Shanker, Swami Agnivesh, Maulana Mahmood Madani, and Archbishop of Delhi Rev Vincent M Concessao are likely to lead the protests. Other leaders participating in the protest are advocates Prashant Bhushan, Shanti Bhushan and Fali S Nariman have participated in the march.

Gandhi’s statue at Swantantrata Senani Bhawan near Kutchehry was garlanded on Sunday. UPCC member Pawan Gupta said that teaching and principles of Mahatma Gandhi are of prime importance in the present scenario. The youngsters should follow the path of Bapu. Prayers were offered at various places. Mahatma Gandhi, a practitioner of non-violence and truth, was instrumental in ending British rule in India. He was assassinated on January 30, 1948, and the day is observed as Martyrs Day in the country.

Recalling the tragic 63 anniversary, people paid tribute to Indian pacifist Mahatma Gandhi (1986-1948) in his country and all over the world. During his childhood, Gandhi was in touch with the community of Jains, who practiced non-violence not only in humans and animals but with plants, microbes, water, fire and wind. Gandhi took such pacifist ideals and tried to synthesize the precepts of Buddhism, Christianity, Islam and his native religion, Hinduism, under the unifying principles of all of them: the idea of renunciation, non-violence and peace. We can always exercise our free will and opt for peace and non-violence in our daily actions. We have the choice of acting rightly or wrongly, morally or immorally.

If one practices prayer and meditation, one will get peace of mind and can earn wisdom to tolerate the extremes of life. Such an individual will be concerned with the well-being of everyone and will do no harm to anybody else. This is the meaning of ahimsa. Mahatma Gandhi says, “Non-violence is the greatest force at the disposal of mankind. It is mightier than the mightiest weapon of destruction devised by the ingenuity of man.” At this time there are many organizations and much talk is directed towards the need for compassion, animal rights, protection of wildlife and endangered species and environmental and ecological balance, etc. Yet it is ironic that at the same time we daily kill millions of innocent animals, birds and fish just to satisfy our tongues. Such activity is a misuse of our free will and intelligence. ... The future of humanity depends on how we choose to act, either individually / selfishly, or collectively / wholistically. Such a choice should be guided by divine wisdom.