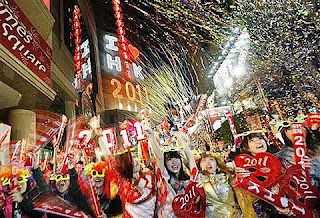 www.voanews.com - Revelers around the world are marking the start of the New Year with celebrations and fireworks displays. South-Pacific countries are the first to mark New Year’s Day as the rest of the world counts down to the event. The New Year first reached the tiny Pacific island nation of Kiribati. New Zealanders welcomed 2011 with a spectacular firework show in Auckland and celebrations elsewhere, while in Sydney, Australia, at least 1.5 million people gathered for the annual fireworks show on the Harbour Bridge. At midnight in Dubai, fireworks exploded from all sides of the world’s tallest building. Hundreds of thousands of people gathered along Hong Kong’s Victoria Harbor to watch fireworks explode from the roofs of 10 of the city’s most famous buildings. About a quarter-million people watched the colours of the Union Jack light up the sky over the River Thames in London.

In Madrid, about 50,000 people gathered in the central Puerta del Sol square for Las Uvas, or “the grapes,” a tradition in which people eat a grape for each of the 12 chimes of midnight. North America’s first 2011 celebrations will be in Newfoundland and Labrador, while south of the border in New York City, about one million blizzard-hardened revelers are expected to cram into midtown Manhattan for the traditional midnight ball drop at Times Square. The city has been reeling from a heavy snowfall earlier in the week that brought air and ground traffic in and around the city to a near-standstill for several days. With 32,256 LED lights and 2,688 Waterford crystals, the four-meter-wide Times Square ball had a picture-perfect test run on Thursday.

Nearly 45 % of Americans will make one or more New Year’s resolutions. The top resolutions we make have to do with eating healthy, weight loss, exercise or quitting smoking. Typically, 75 % of people who make a resolution stick to it within the first week. After six months the number drops to 46 % of people who are still following their resolution. Today is a Day for Reflection. New Year’s Day marks the beginning of a new opportunity to be better human beings. It is a time to reflect upon the past, be grateful to our spiritual masters, think over the lessons they have taught us and look forward to strengthen our humble efforts to revive and refresh God consciousness everywhere in the world. 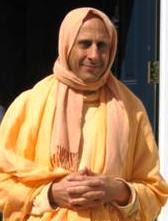 The real problems of the world, and the solutions to the problems, are revealed by the grace of God to the simple heart. ... So harmonizing the temporary phenomena of this world, of what comes into our lives, with the higher principle of bhakti - watering the root of the tree - is the only solution. In this year of 2010 the world is really a mess. Economically it is a mess. There are wars and potential wars in so many places. There are persecutions and harassments and genocides. There are ecological disasters growing worse and worse. So many problems. ... We are coming into this new decade, 2010. Let us try to re-habituate ourselves to have simple hearts and resolve the complications of the world with the simple solutions and never leave that. ... It means to be the servant of the servant of the servant of the servant and feel oneself “anu”, very grateful. If you feel yourself qualified for something, you are not grateful. If you feel yourself unqualified, you are really grateful. So when you are humble you can be grateful, and when you become grateful you become full of greatness, because you become full of Krishna, who is great.