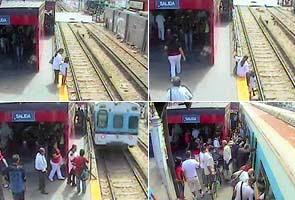 ARGENTINA (AP) – A woman’s bid to avoid paying a train fare nearly cost her the life of her daughter. A girl is miraculously alive in Argentina after her mother lowered her onto the tracks just as a train was coming into the station, according to surveillance video. Video released Friday by the commuter rail operator shows the woman guiding the child underneath the platform, apparently trying to hide from ticket collectors. The woman appears set to join the child hiding under the platform when suddenly she sees the train approaching. The woman scrambles back up onto the platform, but her daughter remains below, the video shows. As the train comes to a stop, the woman bends over and peers into the gap between the train and platform, apparently checking for the girl. Other commuters who witnessed the scene cluster around. “We quickly cut the electrical current to avoid any accident,” said manager Guillermo D’Abenigno of Buenos Aires Trains, or TBA for its initials in Spanish.

“You couldn’t hear anything. We feared the worst — that the girl was dead, torn to pieces under the train,” he added. TBA workers ultimately were able to crawl underneath the platform where they found the girl terrified but unharmed, safely ensconced inside a tiny nook. “It was a mishap with a little luck,” D’Abenigno said. Authorities have not given any identifying details on the mother or the daughter, who appears to be a toddler or slightly older. D’Abenigno said people commonly do “all kinds of things to get out of paying the fare.”

Watch the images caught on CCTV :

A woman, so as to avoid paying two train tickets of $ 0.80 cents each, tried to cross the tracks and avoid scrutiny of the turnstile to exit the station, without seen that a train was approaching. The little girl was almost crushed by the machine but she survived because she managed to protect herself into a nook. To rescue the girl from below the trains, employees of the trains company Buenos Aires (TBA) had to cut the electricity, because among the tracts there is a 830-volt third rail. In fact, if the girl had escaped from the other side she would have been electrocuted. Parenting is a big responsibility, and often we expose our family at great risk. The worse danger is to eliminate God from our children's lives. Undoubtly, caring for children in the service of the Lord is a great blessing for us. 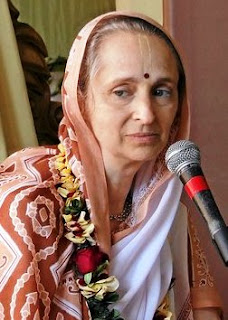 We parents and teachers who guide and care for children in Krishna consciousness must consider our need to relax, recharge, and get spiritual nourishment. Otherwise, we’ll become exhausted. ... Children learn more through experience than concepts. So they’ll know more about spirituality from what we are than from what we say. To show saintly qualities, we must regularly immerse ourselves in a concentrated bath of serving Krishna through hearing about Him, chanting His names, and so on. ... Involving our children in our morning spiritual practice will help us gain the sustenance we need. When children are very young, of course, they need some simple diversions so that we may focus on our worship. But within a short time, children included in daily morning devotions respect parents’ or teachers’ personal time with Krishna. On the other hand, when we leave children sleeping so that we can have our own devotions, not only do the children lose out on the benefit of attending, but gradually we will be tempted to stay sleeping as well.

Mother's Day is coming. I made an order for 2 bottles of Birds Nest soup (http://hongkong-bird-nest.50webs.com/index_e.htm) as well as 4 packets of Chinese tea that's supposed to be good for regulating cholestrol. My mom's cholestrol has been pretty high lately, or so she tells me.