SUN SALUTATIONS - SURYA NAMASKARS
TO MANIFEST THE DIVINITY WITHIN 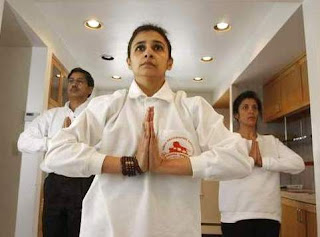 Mount Kisco, NY - For Lower Hudson Valley residents, a free public workshop Sunday will teach the 10 yogic poses and breathing techniques that make up a sun salutation or surya namaskar. As one of the fundamental concepts of Hindu thought, yoga has been practiced for thousands of years in India. Since 2007, the Hindu Swayamsevak Sangh USA, a nonprofit socio-cultural organization, has sought to popularize surya namaskar by organizing a two-week yogathon across the country. “On a philosophical level, we believe that our physical well-being is connected to the celestial bodies,” said Pragya Kant Manglik, general secretary of HSS for the northeast region. “Life on earth would not be possible without sun, and the salutations are a recognition of a life source.” The yogathon, whose motto is Health for Humanity, aims to create awareness about yoga and its advantages by dedicating 1 million salutations to surya or sun between Jan. 15 and Jan. 30.

Last year, the event came within striking distance of the goal, with about 9,000 people offering close to 945,000 salutations. “I find it to be a great stress reliever and I feel a lot more energetic after I do the namaskars,” said White Plains resident Deepali Sharma, a practitioner since age 5. A few chapters of HSS, including in Westchester and Rockland, are also organizing a 24-hour sun salutation “marathon.”

“Surya Namaskars are good for the cardiac, respiratory and circulatory performance of the body,” said Dr. Kiran Patil, a neurology resident at Westchester Medical Center. “It’s good for the mind, body and soul.” The beauty of the simple exercise is it doesn’t need special training or equipment. “It tends to all your muscle groups and promotes blood and lymph flow to practically all organs of the body,” said Dr. Sankaran Krishnan, a pediatric pulmonologist at Westchester Medical Center. It is recommended to practice Surya Namaskar before other asanas, because it gives elasticity to joints and muscles of the body, provides a massage to internal organs, which facilitates the realization of the other exercises.

The Surya Namaskar or Sun Salutation is considered the most comprehensive Yoga exercises because it harmoniously combines breathing and the main asanas in a continuous movement. It consists of 12 positions corresponding to each of the 12 zodiac signs or to each of the 12 phases of the sun, too. The sun goes down for 6 months in the sky dome and then it rises during the other 6 months. Similarly, the Surya Namaskar has 6 positions downstream and 6 upstream and you should practice them facing the Sun. It is ideal that this series of movements takes place in a very concentrated way, during 5 or 10 minutes once or twice daily. Mantras can also be combined with Surya Namaskar, increasing the physical and spiritual benefits. For this purpose there are 12 mantras associated with each of the 12 positions and each is a salute to one of the bestowal of life solar qualities. Thus, when using mantras, repeated mentally or orally, it is necessary to make 12 cycles of Surya Namaskar.