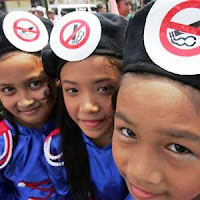 (Reuters) - World No Tobacco Day is observed today, May 31 with the aim to highlight health hazards associated with tobacco use and drum up support for effective policies to discourage its consumption.  However, tobacco will kill nearly six million people this year, including 600,000 non-smokers, because governments are not doing enough to persuade people to quit or protect others from second-hand smoke, the World Health Organization (WHO) said.  Since there is often a lag of many years between when people start smoking and when it affects health, the epidemic of tobacco-related disease and death has just begun, the WHO said. But by 2030, the annual death toll could reach 8 million.  The UN health body urged more governments to sign up to and implement its tobacco control treaty, warning of the terrible consequences if current trends persist.

To mark World No Tobacco Day on May 31, the World Lung Foundation (WLF) campaign group launched a website of graphic and gruesome images of the health effects of smoking that health officials can download for use as warnings on tobacco packaging.  Tobacco kills up to half its users and is described by the WHO as “one of the biggest public health threats the world has ever faced”. It causes lung cancer, which is often fatal, and other chronic respiratory diseases. It is also a major risk factor for cardiovascular diseases, the world’s number one killers.  If governments do not take steps to cut smoking rates, tobacco could cause up to a billion deaths in the 21st century, a dramatic rise from the 100 million deaths it caused in the previous century.

Today we celebrate World No Tobacco Day that falls on May 31st of every year.  It was established by the World Health Organisation to encourage smokers to take a 24-hour abstinence from all forms of tobacco consumption, whilst highlighting the negative health effects.  The world wants you to stop smoking, but are you ready to do it?  It is difficult to be freed from conditional bondage.  When it is about any material attachment or a vice, one can not easily get rid of such material bondage.

The camel is pleased to eat thorny plants, which destroy its nose, to enjoy the taste of his own blood without being conscious of the pain and self-mutilation. It seems that human beings act in the same way.  A cigarette after another, one package after another, looking for enjoyment, but this pleasure lasts just a short time. Different organizations warn that smoking is hazardous to health, however for the smoker, the taste is what counts!  Then he is forced to seek for another kind of pleasure.  We had obtained nothing but we anxiously try to get more of the same.  The process of Bhakti Yoga indicates that the intoxication, indiscriminate sex, gambling, eating meat, are self-destructive activities that we have to leave as soon as possible.
Śrīla Atulananda Ācārya :
“Yoga and Current Era”
Instituto Superior de Estudios Védicos - ISEV
http://www.atulanandadas.cl/
http://www.atulanandadas.cl/?option=com_content&task=view&id=50
Publicado por dasavatara das en 9:01 PM

No tobacco day is celebrated once in a year. On that day people which ever smoke or take tobacco can quit that. The WHO Framework Convention on Tobacco Control and its guidelines provide the foundation for countries to implement and manage tobacco control.

Yes, you are totally right. Thanks for you comment.

Tobacco is not a good for health..We should quit that.