ARGENTINA PLANE CRASH
KILLS ALL 22 PEOPLE ON BOARD

(CNN) - All 22 people aboard a commuter plane were killed when it crashed in southern Argentina, the airline said Thursday.  The Sol Lineas Aereas plane was headed to the city of Comodoro Rivadavia from Neuquen on Wednesday night when the pilot issued a distress call, said airline spokesman David Avellaneda.  Shortly after, the plane went off the radar, he said. It had on board 18 adult passengers, a baby and three crew members.  Authorities later found the wreckage of the plane in Rio Negro province. There were no signs of survivors, the airline’s website said.  “Last night, when the emergency happened, we put in place a search and rescue operation in the area, which at the time was experiencing very bad weather conditions,” said a spokesman for the country’s National Civil Aviation Administration, according to the state-run Telam news agency.

Once the wreckage was found, federal investigators were called to the scene to determine the cause of the crash, he said.  “Unfortunately there are no survivors.  We see burnt remains, everything burned,” Ismael Ali, who directs the hospital in the nearest town of Los Menucos, told the Todo Noticias channel.  Sol is based in the northern Argentine city of Rosario and generally serves smaller cities in the provinces.  Sol said it received an emergency communication from the plane at 8:50 p.m. local time, nearly halfway into the flight from Neuquén near the Andes to Comodoro Rivadavia along the coast of Rio Negro province.

The investigation into this small plane crash in southern Argentina - which killed three crew members and 19 passengers, including a baby - will take up to three months to get accurate information about the cause of the accident, said Claudio Somoza, director of the Association of Argentine Pilots.  The Transportation Minister, Juan Schiavi, described the crash of Saab 340 plane as a “very rare accident.”  It is very sad to observe that similar accidents happen everywhere.  This material world is full of nasty surprises that happen at any time and only the Holy Name of the Lord is our refuge. 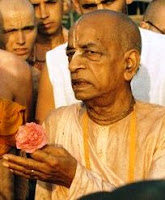 One who is intelligent understands that there is a great and supreme authority above everything.  That great authority appears in different incarnations to save the innocent from disturbances. ... We are always in danger because at any moment death can take place.  It is not that only Gajendra, the King of the elephants, was afraid of death.  Everyone should fear death because everyone is caught by the crocodile of eternal time and may die at any moment.  The best course, therefore, is to seek shelter of Krishna, the Supreme Personality of Godhead, and be saved from the struggle for existence in this material world, in which one repeatedly takes birth and dies.  To reach this understanding is the ultimate goal of life.
Śrīla A. C. Bhaktivedanta Swami Prabhupāda :
“The Śrīmad Bhāgavatam”
Purport in Canto 8: “Withdrawal of the Cosmic Creations”
Chapter 2: “The Elephant Gajendra’s Crisis” - Verse 33.
Bhaktivedanta VedaBase 2003 (Folio)