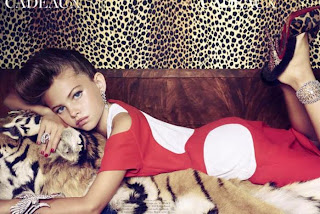 www.eitb.com - The December/January edition of Vogue Paris Cadeaux sparked a wave of criticism within France. The French edition of one of the world’s most popular fashion magazines brought out a publication over the Christmas period featuring girls aged between five and seven years, posing like sultry women, heavily made-up and wearing high-heels, couture clothing and sophisticated jewellery. Such was the level of uproar that the controversy has now crossed borders. The photos portray the girls wearing necklaces by Bulgari, Boucheron and Van Cleef & Arpels. The photography session, held about a month before the release of the publication, was led by prestigious fashion photographer Sharif Hamza. 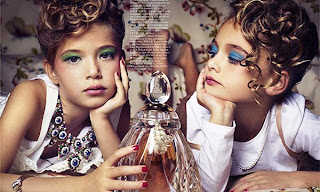 The models, Thylane, Lea and Prune, are shown reclining on a divan and a bed and standing in front of a mirror dressed in made-to-measure garments designed by Versace, Lanvin and Yves Saint Laurent. Almost all the images show the girls enjoying a sophisticated and luxurious lifestyle. Although the article purports to show little girls playing at being grown-ups by dressing up in their mothers’ clothes, many have spoken out against the images claiming they portray childhood in a sexual way. Those people are awaiting an official reaction to the photos from campaigners for child protection. You can judge for yourself if you feel that Vogue has gone too far and has exceed some limits.

The famous fashion magazine Vogue is in the middle of the controversy after publishing photos of models from 5 to 7 years sensually posing for a catalog. Dressed in the best global brands, the little girls posed as adult women. There are plenty of women who allow their little girls to dress in their mothers’ clothes, but this goes so much farther. Adult community is not protecting children’s rights when photos like these are considered fashionable. During Vedic times, children were fully protected, and generally, people’s lives followed four stages called “ashrams”. It is not correct to make children jump over their stage and pose as adults in order to better sell a fashion magazine. 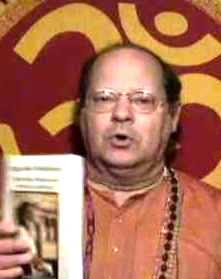 There are four stages, or ashrams, of life every individual passes through. The first stage of life is called the Brahmacharya ashram. This period is rounded out to the first 25 years of life. It is considered to be a period of student life in which one remains celibate for acquiring the focused and determined state of mind for spiritual and academic advancement. ... The second stage of the life is termed the Grihastha ashram, in which young men and women marry and raise a family. ... The third stage is termed the Vanaprastha ashram, which generally starts sometime around the age of 50 years old. At this stage it is expected that one’s children have grown up and found a place in society. ... The fourth stage of life is termed the Sannyasa ashram. This stage is primarily for men and extends from around the 75th year of one’s life until the final emancipation. These stages may change according to circumstances.