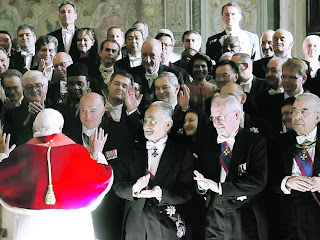 ROME (www.allheadlinenews.com) - Pope Benedict is demanding governments do more to ensure Christians can practice their faith without discrimination or violence. He also called for Pakistan to repeal its anti-blasphemy laws. Pope Benedict’s concern for religious freedom was the focus of his annual address to ambassadors accredited to the Vatican. He cited recent attacks on Christians in Egypt, Iraq and Nigeria. The pope addressed the diplomats in French, the language of diplomacy. Speaking of the recent “brutal” attack on a Coptic church in Alexandria, Egypt he insisted that Christians are original members of these societies and deserve to live there in security with full civil rights. He said a succession of attacks is yet another sign of the urgent need for the governments of the region to adopt effective measures for the protection of religious minorities, despite the difficulties and dangers.

In a rare move, Benedict used his speech to specifically ask a country to change one of its laws. He told Pakistan to reverse its blasphemy laws, which carry the death sentence for insulting Islam. He said these laws are a pretext for violence against non-Moslems. The pope made reference to last week’s assassination of Salman Taseer, the governor of Punjab province and an outspoken liberal, who was gunned down for opposing the law. The pope also cited China in his speech, saying the state should never have a “monopoly” over the faith. Responding to pope’s remarks, Pakistan’s one of the influential religious parties described Benedict’s remarks as offensive and accused him of interfering in the country’s internal matters.

Pope Benedict XVI used an annual meeting at the Vatican to call on 170 nations to denounce attacks on Christian minorities in Egypt, Iraq and Nigeria. The Pope has particularly called on Pakistan to cancel its anti-blasphemy law, describing it as pretext for violence against minorities. The law made headlines in November last year when a local court sentenced a Christian mother to death for insulting the Prophet Mohammad. Human rights group considers blasphemy law as extremely discriminatory especially against the minority groups in the country. Today, minorities suffer violent attacks because many religions do not have two basic ingredients of spiritual practice: “tolerance and mercy”.

Bhaktivinoda Thākura has explained that the tolerance mentioned in Śiksāstakam includes mercy. He has drawn this from Mahāprabhu’s own explanation of the tree’s tolerance. While tolerating the elements or when being cut down, the tree gives mercy to others. In his Gitāvali, Bhaktivinoda Thākura writes that when one becomes tolerant like a tree one will turn from violence and give protection to others. In his Sri Sanmodana-bhasyam, he describes this quality of tolerance as pure compassion free from envy. Although the qualities of humility and tolerance ornament the sādhaka and identify him or her as a sadhu, at the stage of nisthā the sādhaka is free from egotism and thus is not attached to the respect that others offer. Such a serious sādhaka avoids the pride of being a sadhu. To avoid this respect, and because of seeing every living being as the resting place of God, a naisthiki-bhakta offers all respect to others in ways appropriate to their embodiment.