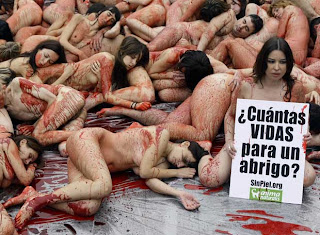 MADRID (Reuters) - On Sunday, anti-fur activists in Madrid lay naked in the streets, covered in fake blood to mirror the corpses of minks and other animals killed for their fur. Despite the fact that it was rainy and about 42 degrees, this large crowd stripped down to get their point across. A cold and rainy day in Madrid, Spain - at just degrees celsius not the best conditions for a naked demonstration, but for these anti fur protesters - nothing was going to deter them from getting their message across. Spanish animal rights activists went nude in the city's streets to join growing global outrage at the fur industry. The activists stripped off in the cold temperatures of last Sunday against the fur clothing industry.

Representing the average number of animals it takes to make a fur coat, the men and women, covered in red paint that resembled blood, lay down and curled up at the Puerta del Sol in the heart of Madrid. Naked men and women posed in to launch their campaign against fur industry and the protest was organised by the animal rights organisation, AnimaNaturalis. In a dramatically staged act they lay naked in the streets near the Puerta del Sol, just in the very heart of the capital city, the Times Square of Madrid. While fake blood was poured over them - mirroring the corpses of the animals used for the fur trade, they were holding up a placard with the words, ‘How many lives just for a coat?’. By this naked protest, the animal rights activists are denouncing the torture and slaying of animals to make fur coats. "Nowadays it is not necessary to kill animals to get their fur. Animals need their fur, we don't," an activist said. "People would rather go naked than wear the skin of an animal that suffered horribly.", she added.

And after one year passed Nārada and Parvata Rishi were coming. When the former hunter saw Narada, his dear Master, from a long distance, he ran and threw his upper cloth on the ground … in order not to harm any ants … and he offered his prostrations to him. … Then Parvata Muni said: "It is a blessing of you, oh Narada. Otherwise how such a ferocious, how such a cruel and who has very cruel heart … but now he could get that sympathy by your grace. It is only the Namam, Divine Name can change them. If the Divine Name is in the proper process, obtained from a realized soul, and if he contemplates and determines: "I am with full vigor, with full faith I will do namam.", then he will do no harm to anybody. So, a devotee means; the harmless creature. He will do no harm to human beings, no birds, no beasts, no insects, none else. He is always following: ahimsā paramo dharma. … Because he follows trinād api sunīcena. Because he considers himself that I am the humbler than blade of grass. I must not harm anybody..

I just laughed at this...