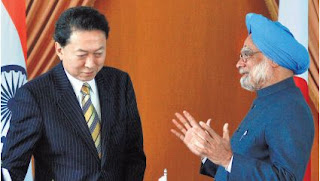 NEW DELHI, India (Xinhua) - India and Japan on Tuesday finalised an action plan to strengthen security cooperation, with Prime Minister Manmohan Singh and his visiting Japanese counterpart Yukio Hatoyama signing a joint statement here. In his opening statement, Dr. Singh said economic partnership between the two countries was the bedrock of the relationship. The two Prime Ministers shared the view that the Delhi-Mumbai Industrial Corridor project was moving forward from planning to the implementation stage. Dr. Singh urged Mr. Hatoyama to liberalise the visa regime to promote investment and the latter too made a similar request. Dr. Singh highlighted the move to provide visa on arrival to visitors from Japan. Hatoyama and Singh also identified nine areas of collaboration and reviewed economic cooperation especially in infrastructure development.

Japan offered to provide bullet train technology to the Indian Railways in its quest to build the Western Dedicated Freight Corridor project from Rewari in Haryana to Vadodara in Gujarat. Both sides decided to work to conclude the Comprehensive Economic Partnership Act at the earliest. The joint statement expressed satisfaction at the deepening of the annual strategic dialogue between the Foreign Ministers as well as other policy dialogues and the desire to enhance exchanges in the defence field. Strengthening of collaboration on issues of common strategic interest; setting up of a strategic cooperation mechanism; increase in defence and coast guard cooperation, exchange of information to fight terrorism and other transnational crimes; cooperation at the U.N.; and cooperation on disarmament and non-proliferation were some of the areas earmarked for enhanced collaboration. Both nations will hold annual bilateral exercise alternately off India and Japan, and if possible hold multi-lateral cooperation too. The Malabar 2007 exercise involves five navies — India, Japan, the United States, Australia and Singapore. The plan also envisages participation as observers in major army and air force exercises and passing exercises during ship visits.

This movement can solve all the problems of life, all the problems in the world. Social, political, philosophical, religious, economic - everything can be solved by Krishna consciousness. Therefore, we request those who are leaders - like His Excellency, who is present here - to try to understand this Krishna consciousness movement. It is very scientific and authorized. It is not a mental concoction or a sentimental movement. It is a most scientific movement. So we are inviting all leaders from all countries to try to understand. If you are sober, if you are actually reasonable, you'll understand that this Krishna consciousness movement is the most sublime movement for the welfare of the whole human society.

Śrīla A. C. Bhaktivedanta Swami Prabhupāda :
“The Journey of Self-Discovery”
Chapter II: ‘Superconsciousness - Who Is Krsna?’.