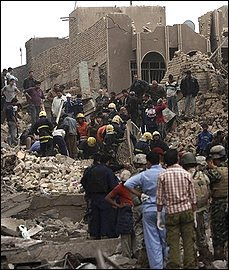 BAGHDAD, Irak (DPA - Reuters) - A series of coordinated attacks struck Baghdad Tuesday, including two suicide car bombers and another vehicle that blew up near government sites. At least 127 were killed and hundreds wounded in the worst wave of violence in the capital in more than a month, authorities said. A total of five attacks, which also included a suicide car bomb on a police patrol, showed the ability of insurgents to strike high-profile targets in the heart of Baghdad and marked the third time since August that government buildings were targeted with multiple blasts that killed more than 120 people. The bombings reinforced concerns about shortcomings in Iraqi security as U.S. forces plan their withdrawal, and parliament held an emergency session with many lawmakers demanding answers for apparent security lapses. Iraq's military spokesman blamed the carnage on an alliance of al-Qaida in Iraq and members of Saddam Hussein's banned Baath Party. The attacks came hours before it was fixed a new date for the country's parliamentary elections on March 6.

The first attack occurred at about 10:25 a.m. when a car loaded with explosives went off at the park of the new seat of the Finance Ministry after a massive truck bombing on August 19 badly damaged its original building in Waziriya district. Seconds later, another car bombing took place near an intersection close to the Interior Ministry in eastern Baghdad, while a third car bombing detonated in the park of a court near the Institution of Fine Arts in Baghdad's western district of Mansour. A minute later, a fourth car bombing carried out by a minibus loaded with explosives went off at the intersection of the Nidaa mosque, near the Ministry of Labor and Social Affairs in the al-Qahira neighborhood in northeastern Baghdad. There was no immediate claim of responsibility for Tuesday's attacks, though al-Qaida in Iraq had said it was behind the last two massive bombings against government buildings in Baghdad in August and October.

Due to his being opposed to Krsna consciousness, the conditioned soul is punished by the witch of the external energy, maya. … In this way the conditioned soul becomes the servant of lusty desires, and when these are not fulfilled, he becomes a servant of anger and continues to be kicked by the external energy, maya. Wandering and wandering throughout the universe, he may by chance get the association of a devotee physician, whose instructions and hymns make the witch of external energy flee. The conditioned soul thus gets into touch with the devotional service of Lord Krsna, and in this way he can approach nearer and nearer to the Lord.
Śrīla Bhaktivinoda Thākura :
"Mahaprabhura Śikshā" Chapter 7 - The Jīva in Māyā
Bhaktivedanta Memorial Library - www.bvml.org/SBTP/
Publicado por dasavatara das en 3:30 AM