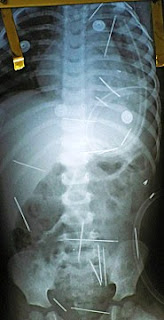 RIO DE JANEIRO (ANSA) - A Brazilian man confessed to pushing more than 40 sewing needles into his two-year-old stepson in what may have been a black magic ritual. The boy, who was admitted to hospital last week by his mother after complaining of stomach pains, was found to have dozens of metal needles inside his abdomen, neck, thorax and legs. One group of needles had punctured his lungs and doctors believe two have pierced his heart. The boy’s stepfather, Roberto Carols Magalhaes, a 30-year-old labourer, was arrested and admitted inserting the needles into the boy one by one during black magic rites, police said. The boy was last night in a serious but stable condition after being airlifted to a hospital in Salvador, the main city in his state of Bahia, where he is expected to undergo cardiac surgery. “He did that for revenge. He did it aiming to kill the child, to take revenge on the child's mother, with whom he used to fight a lot. His mistress told him to kill the child through a macabre ritual,” Helder Fernandes Santana, the police chief said. Brazilian media reported that Mr Magalhaes took the boy each weekend to the home of a woman named Angelina, who ordered him to plunge the sewing needles, some two inches long, into the boy. Police also arrested two women who have helped him to push the needles in. One of them reportedly belongs to a religious group.

The boy’s mother first became alarmed last week when her son began vomiting - the result, doctors say now, of a needle piercing a lung. When he began to complain of stomach pains, Maria Souza Santos, 38, a maid, took him to hospital in Barreiras, a town close to the poor village where they live. Mrs Santos also handed over to police objects thought to have been used in rituals or black magic, including a bottle of cachaca, a common Brazilian rum made from sugar cane. X-rays televised across Brazil clearly show dozens of needles deep in his body, some clustered near his lungs and others in his abdomen, neck and legs. There are no signs of surface wounds. The boy, was rushed by helicopter to Bahia's main city Calvados for emergency operations to remove the needles, but doctors said an infection near his heart prevented immediate surgery.