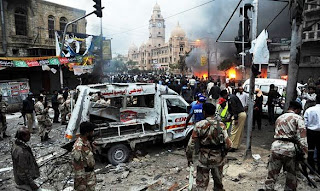 KARACHI, Pakistan (AP) - A suicide bomber struck a procession marking a Shia Muslim holy day in Pakistan's biggest city today, killing at least 30 people in an attack blamed on extremists trying to spark a sectarian war. The minority sect has suffered frequent attacks by Sunni extremist groups. The suicide bomber who struck yesterday targeted thousands of Shias marching through the streets to observe Ashura, the most important day of a month-long mourning period for the seventh-century death of the Prophet Muhammad's grandson, Imam Hussein. More than 50,000 Shias, 15 per cent of Pakistan’s population, marched through the city whipping themselves to mark the holy day of Ashura. The procession, commemorating the death of the Prophet Muhammad’s grandson in the 7th century, is held every year on Ashura, the tenth day of the Islamic holy month of Muharram. Shias traditionally wear black, beat their torsos with chains and slice their skin with knives.

The bomber managed to get into the procession despite the presence of more than 10,000 paramilitary troops. The attacker blew himself up at the front of the procession in the city centre. Outraged Shias responded to one of the worst sectarian attacks in the country this year by setting fire to buildings and vehicles at the blast site and pelting security forces with stones. Furious participants in the ceremony turned on police, soldiers and media after the blast which sent smoke billowing over the centre. Witnesses in Karachi said that armed Shias in the procession fired shots in the air after the bomb blast, while others pelted police and medical teams with stones. The southern city of Karachi has largely been spared the Taliban-linked violence that has struck much of the rest of the country. But it has been the scene of frequent sectarian, ethnic and political violence. Yesterday's bombing was the third explosion in as many days to hit Karachi, although authorities attributed a blast that wounded 30 on Sunday to a buildup of gas in a sewage pipe. On Saturday, a blast near a Shia procession wounded 19 people. 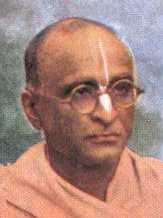 I happen to be an entity dominated by the knowledge of the five mundane elements. I am entrapped in the functions of littleness by abstaining from thoughts of the great one. Because I have preferred to remain confined to the functions of my littleness, the egotistic sentiment that I am the master of myself and of all entities has appeared in me. It has become necessary to get rid of this desire for domination. Nothing is easier than to assert that the little should aim at being identified with the great. If one allows oneself to be mastered by such senseless ambition and tries to realize his oneness with the divinity, such egotistic vanity effectively blocks the course of all real well-being.