16,000 EVACUATED AND DEATH TOLL
RISES DUE TO FLOODS IN ARGENTINA 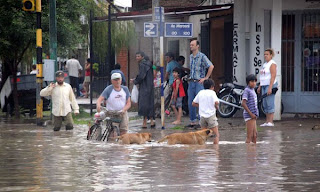 BUENOS AIRES, Argentina (EFE) - The rains once again are affecting northeastern Argentina, where the heavy rainfall has already resulted in 16,000 evacuations and fears of a surge in various diseases. The intense rains deluging northeastern Argentina have forced more than 16,000 people to be evacuated from their homes in the provinces of Entre Rios and Santa Fe because of the flooding caused by a rise in the levels of the rivers. Sustained stormy weather has saturated the region and caused the Uruguay river to overflow its banks.

Entire families have left their homes and moved into shelters due to the torrential rains that have hit Entre Rios, leaving the province “devastated”. Concordia, a city in Entre Rios on the border with Uruguay, is one of the areas that has been most affected by the rise in the Uruguay River’s level. Besides Entre Rios and Santa Fe, flooding also affected the provinces of Corrientes and Chaco. The flooding has caused the streets, which are submerged, to become filled with trash and dead animals, especially fish and mice, which – in turn – has sparked fears that there could be a possible spread of infectious diseases. In Santa Fe, capital of the like-named province and located west of Entre Rios, the Parana River overflowed its banks, forcing more than 100 residents of riverside communities from their homes. The provincial capital faces a dire situation because its drainage system “is absolutely inappropriate and inefficient”. The Salado River overflowed its banks in May 2003, killing about 20 people and forcing some 100,000 others from their homes in Santa Fe province, the majority of them residents of the capital. 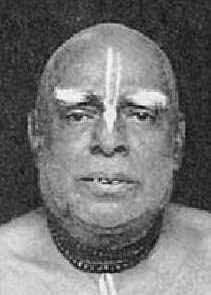 The Vedas have said that the three qualities, goodness, passion and ignorance, are the material qualities. The jīva is by nature without these qualities. When the jīva, because of his smallness, opposes the Lord and becomes weak, the material qualities become strong and overcome him. ... By acceptance of the gross and subtle bodies, the jīva falls into the ocean of six material qualities, and becoming overwhelmed, experiences happiness and distress in the wheel of birth and death. ... The jīva is actually a pure entity, and ignorance - the function of māyā - is but an upādhi or temporary covering. The results of this upādhi are the three miseries: adhyātmikah, adhidaivikah and ādhibhautikah.
Śrīla Bhaktivinoda Thākura :
"Mahaprabhura Śikshā" Chapter 7 - The Jīva in Māyā
Bhaktivedanta Memorial Library - www.bvml.org/SBTP/
Publicado por dasavatara das en 12:55 AM