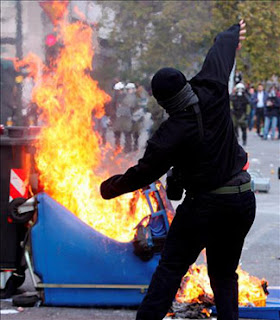 ATHENS, Greece (AP) - Masked youths hurled firebombs and jagged chunks of marble at police as violence erupted during a march in Athens Sunday to mark the first anniversary of the police shooting of a teenager whose death sparked massive riots. Police fired volleys of tear gas to disperse the youths in running street battles in the center of the capital as several thousand demonstrators marched to commemorate the death of 15-year-old Alexandros Grigoropoulos, who was killed by a policeman's bullet on the evening of Dec. 6, 2008. The teenager's death had sparked some of Greece's worst riots ever, with youths rampaging through cities for two weeks last December, protesting police violence. The rioters smashed bank windows, overturned trash bins and set them alight as they hurled rocks and fire crackers at riot police. At Athens University, masked protesters broke into the building and pulled down a Greek flag, replacing it with a black-and-red anarchist banner.

Police said 16 officers were hurt and at least five protesters were injured in the clashes, including a woman who was hit by a police motorcycle. Police on motorcycles chased rioters amid scenes of chaos at Athens' main Syntagma Square, with youths punching and kicking officers pushed off their bikes. Authorities said 134 people were detained for public-order offenses in Athens and another 80 in the northern city of Thessaloniki, the Greece's second-largest city, where youths threw gasoline bombs at police, set fire to several cars and smashed 10 storefronts, including a Starbucks cafe. Last December, within a few hours of the teenager's death, riots spread from the Greek capital to several cities across the country, with police apparently powerless to prevent youths from smashing, looting and burning stores in violence that continued for two weeks. 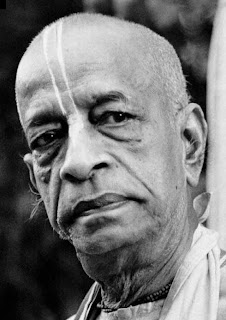 "The next time I see someone performing such sańkīrtana, I shall certainly chastise him by not only confiscating all his property but also converting him into a Muslim." After saying this, the Kāzi returned home, and the devotees, greatly shocked that they were forbidden to chant Hare Krishna, submitted their grief to Lord Caitanya Mahāprabhu. Lord Caitanya ordered, "Go perform sańkīrtana! Today I shall kill all the Muslims!"

"Śrī Caitanya Caritāmrita - Ādi-līlā : 17.128, 129 and 130"
It is not necessary to commit violence to stop the opposition from hindering a movement, for one can kill their demoniac behavior with reason and argument. Following in the footsteps of Lord Caitanya Mahāprabhu, whenever there are obstacles the Hare Krishna movement should kill the opposition with reason and argument and thus stop their demoniac behavior. If we became violent in every case, it would be difficult for us to manage our affairs. We should therefore follow in the footsteps of Lord Caitanya Mahāprabhu, who disobeyed the order of Chand Kāzi but subdued him with reason and argument.
Śrīla A. C. Bhaktivedanta Swami Prabhupāda
Purport in "Śrī Caitanya Caritāmrita - Ādi-līlā : 17.130"