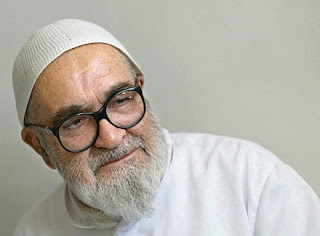 TEHRAN, Iran (AP) - The spiritual father of Iran's reform movement died Sunday at the age of 87, prompting thousands of his followers to immediately head to the holy city where the dissident cleric is to be buried. Grand Ayatollah Hossein Ali Montazeri was one of Iran's most senior dissident clerics, a staunch defender of the nation's opposition movement as well as a learned theologian and pillar of the Islamic revolution 31 years ago. A huge display of mourning for Montazeri could transform his funeral today Monday into another display of power by the opposition, whose activists have for months defied a brutal crackdown, a mass trial and abuses in detention to denounce the country's hard-line clerical rulers. Opposition leaders called for people to turn out for a day of mourning. Police reinforcements were also called out into the streets of Qom, the religious center south of the capital where commemorations will take place today.

Montazeri was a key figure in the 1979 Islamic Revolution who later accused his fellow clerical leaders of imposing dictatorship in the name of Islam. His criticism persisted after June's disputed presidential election ignited a new wave of anti-government protest. In particular, he opened the door to direct condemnation of the ruling clerics, a bold step that energized Iran's young activists. In August, he decried the "despotic treatment" of protesters at the hands of the ruling theocracy. A month later, he accused the regime of committing "crimes ... in name of Islam." "From the beginning of the revolution, we have been chanting slogans of independence, liberty, Islamic republic," he said. "The complaint I have is why the slogans we have been chanting since then and are still chanting haven't been fulfilled." Interviewed by the Guardian in 2006, he accused the regime of encouraging people to hate religion by "misusing Islam".

Raja Ram Mohan Roy, the founder of the sect of Brahmoism, did not think it worth his while to study the Bhagavata. … Ram Mohan Roy was an able man. He could not be satisfied with the theory of illusion contained in the Mayavada philosophy of Shankara. His heart was full of love for Nature. He saw through the eye of his that he could not believe in his identity with God. But Ram Mohan Roy was also a patriot. He wanted to reform his country in the same way as he reformed himself. … His noble deeds will certainly procure him a high position in the history of reformers. But then, to speak the truth, he would have done more if he had commenced his work of reformation from the point where the last reformer in India left it. … Suffice it to say, that the Bhagavata did not attract the genius of Ram Mohan Roy.