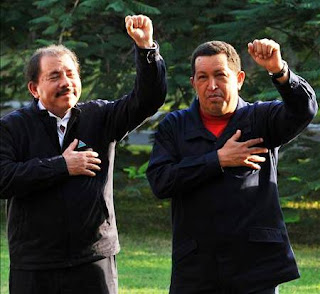 HAVANA (BBC News) - At the inauguration of the 8th ALBA Summit in Cuba's capital Havana, Cuban leader Raul Castro accused the US of treating Latin America as its "backyard" and denounced a deal giving US armed forces access to Colombian military bases. Meanwhile Mr Chavez said US criticism about Latin America's relationship with Iran was an "imperial offensive". Castro said on Sunday that the ALBA had brought many achievements to the member countries. This regional political and economic bloc, the Bolivarian Alliance for the Peoples of America (ALBA), was founded five years ago as a radical alternative to America's free trade policies in the region. Launched on the proposal by Venezuelan President Hugo Chavez in2001, ALBA is committed to realizing the idea of social, political and economic integration among the Latin American and Caribbean countries.

The 8th Summit of ALBA was also attended by Venezuela's Chavez, Bolivia's Morales and their Nicaragua's counterpart Daniel Ortega, along with other leaders of state and government, foreign ministers and representatives of the member countries. Debates over the challenges, opportunities and integration mechanism for the region and the negotiations aimed at reaching consensus on the Copenhagen's UN climate change conference among the member countries were organized during the summit. Castro also criticised Washington for presiding over what he described as "an electoral farce" in Honduras. He said the country's people "have been deprived of their constitutional rights and there has been imposed, with the support of the US administration and a coup-led government (in Honduras), an electoral farce". Shortly afterwards Mr Chavez openly rejected a warning made by US Secretary of State Hillary Clinton on Friday that Latin American countries needed to "think twice" about fostering a relationship with Iran. Iran's President Mahmoud Ahmadinejad last month visited Brazil, Venezuela and Bolivia which voiced support for Iran's right to a nuclear programme.

Those really learned leaders of society like Brahmā, Śiva, Kapila, the Kumāras, Manu, Vyāsa, Devala, Asita, Janaka, Prahlāda, Bali, and later on Madhvācārya, Rāmānujācārya, Śrī Caitanya and many others — who are faithful philosophers, politicians, educators, scientists, etc. — surrender to the lotus feet of the Supreme Person, the all-powerful authority. Those who are not actually philosophers, scientists, educators, administrators, etc., but who pose themselves as such for material gain, do not accept the plan or path of the Supreme Lord. They have no idea of God; they simply manufacture their own worldly plans and consequently complicate the problems of material existence in their vain attempts to solve them.

Śrīla A. C. Bhaktivedanta Swami Prabhupāda:
"The Bhagavad-gītā As It Is - Purport in Chapter 7 - Verse 15"
Publicado por dasavatara das en 8:19 AM