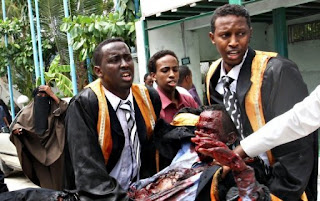 MOGADISHU (BBC News) - The death toll rose to 23 on Friday in a suicide bombing attack at a Somali graduation ceremony, which killed three members of Somalia's interim government: Health Minister, Education Minister and Higher Education Minister. The explosion went off in a crowded meeting room at the hotel, where hundreds of people had gathered for a graduation ceremony of medical students. Information Minister Dahir Mohamud Gelle said the male bomber had been dressed in women's clothing, "complete with a veil and a female's shoes".

Somalia's President Sheikh Sharif Sheikh Ahmed, has described the attack as a "national disaster". Presidential spokesman Hassan Haile had told the BBC on Thursday he believed the bomb was the work of al-Shabab, however the Somali Islamist group al-Shabab has denied being responsible for a suicide attack. A spokesman for the group said they believed the government had been responsible for the attack. "We believe it is a plot by the government itself. It is not in the nature of al-Shabab to target innocent people." The spokesman said some government officials had left the Shamo Hotel before the bomb went off, so it was "clear that they were behind the killing". The European Union in a statement condemned the attack as "cowardly acts of terrorism". "The horrific attack is another demonstration of the extremists' complete disregard for human life. The fact this bombing targeted graduating medical students - the future doctors of Somalia - is particularly egregious," the statement said. The students had been graduating from Benadir University, which was set up in 2002 to train doctors to replace those who had fled overseas or been killed in the civil war.

So long as people do not understand that they are inseparably connected, and until the activities of the people are God-centered, mere sentimentalism or fictitious ideas will not be able to foster real love amongst individuals. If we know that the infliction of harm to other animate beings is detrimental to our own interest and will bring harm in return, we will not be encouraged to harm any individual, nay even any sentient being of the world. If we can love the Absolute Whole, I mean the Godhead, we cannot have the impetus to injure any of His parts. So, according to me or the teaching of Lord Gauranga, Divine Love is the best solution of all the problems of the world.
Śrīla Bhakti Dayita Madhava Maharaj :
"Realistic Solution for Diverse Humanity"
Congress of World Religions, October 1968 in Calcutta, India.
Bhaktivedanta Memorial Library - www.bvml.org/SBDMM/
Publicado por dasavatara das en 8:01 AM