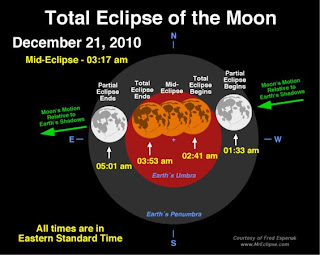 newcity.patch.com - It should be an entertaining show today night into tomorrow morning, as the moon goes into a full eclipse and we enter the Winter Solstice. Early tomorrow morning, North and Central America and parts of northern Europe and Asia will see a total lunar eclipse in its entirety; a phenomenon astronomers say is not rare but can be staggeringly beautiful. This year’s total lunar eclipse is also called the Christmas lunar eclipse, as it happens a few days before Christmas. Although this is the second lunar eclipse of 2010, it is the first total lunar eclipse since Feb. 20, 2008. And, astonishingly, the last total lunar eclipse that occurred simultaneously with Winter Solstice, as it is tonight, last happened in the year 1638. The last lunar eclipse of 2010 is especially well-placed for observers throughout North America, according to NASA’s eclipse website.
When the moon is completely concealed by Earth, this is known by Space experts as totality. The last eclipse this year happened on June 26, it was nowhere near as vivid as tonight’s is expected to be. The total eclipse phase is going to be bright red and orange. Tomorrow is also winter solstice, when North Pole points directly away from the sun and South Pole points directly towards the Sun, he said, adding the sun shines at lowest heights in northern skies and at maximum heights in southern skies. This results in the shortest day in the Northern Hemisphere, but at the same time it is the longest day in Southern Hemisphere.

According to science, a total lunar eclipse occurs when Earth passes between the Sun and the Moon. The terrestrial shade is the cause of that the full moon disappear during approximately one hour. Unlike Sol's total eclipses, the lunar eclipses can be observed from all the nighttime terrestrial hemisphere. Depending on the status of the atmosphere, the moon will adopt distinct tonalities of red color, due to the diffraction of solar light in the terrestrial atmosphere. From the Vedic times, during eclipses people use these moments to concentrate in spiritual activities, and they come in millions to a holy place. According to their religious beliefs, they take bath and chant certain prayers or engage in Nama-sankirtana chanting aloud the Name of the Lord. 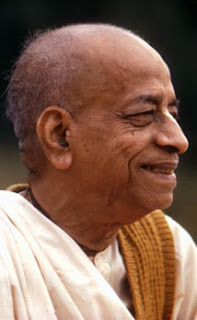 The Lord advented Himself on the Phālgunī Pūrnimā evening of 1407 Śakābda, and it was by the will of the Lord that there was a lunar eclipse on that evening. During the hours of eclipse it was the custom of the Hindu public to take bath in the Ganges or any other sacred river and chant the Vedic mantras for purification. When Lord Caitanya was born during the lunar eclipse, all India was roaring with the holy sound of Hare Krishna, Hare Krishna, Krishna Krishna, Hare Hare/ Hare Rāma, Hare Rāma, Rāma Rāma, Hare Hare. These sixteen names of the Lord are mentioned in many Purānas and Upanishads, and they are described as the Tāraka-brahma nāma of this age. It is recommended in the śāstras (revealed scriptures) that offenseless chanting of these holy names of the Lord can deliver a fallen soul from material bondage. ... The simultaneous occurrence of the Lord’s appearance and the lunar eclipse indicated the distinctive mission of the Lord. This mission was to preach the importance of chanting the holy names of the Lord in this age of Kali (quarrel).