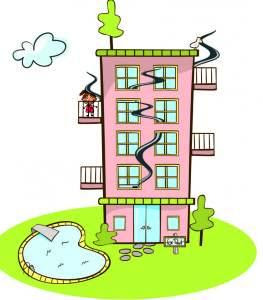 www.abcnews.go.com - Children who live in apartments have more tobacco contaminants in their blood than those who live in houses - even if smokers in the household don’t light up indoors - a new study suggests. Research has linked secondhand smoke to a host of health conditions in kids, including asthma and respiratory infections, ear infections, low test scores and sudden infant death syndrome. In this latest study, researchers drew upon a national survey of parents and children ages 6 through 18 that took place from 2001 to 2006, and they also performed tests to check the levels of a contaminant called cotinine, a chemical which is present in the blood of children who have been exposed to the nicotine in tobacco smoke. Only children who lived in homes in which no one smoked indoors were included in the analysis. The research showed that children who lived in apartments generally had higher levels of tobacco smoke contaminants in their blood than to children who lived in houses. They also found that tobacco contaminant levels were highest in children under 12, those who were black, and those living below the federal poverty level. One of the study authors, Dr. Jonathon Winickoff at Massachusetts General Hospital in Boston, said he believes his findings will help create the social and political will to push people toward establishing smoke-free housing policies.

Children in apartment-style housing are exposed to higher levels of tobacco smoke because of shared walls, ventilation systems and ductwork. Secondhand smoke can seep through these shared structures and into apartments in which no one smokes inside the home. Once the secondhand smoke is no longer visible to the eye, it can still be absorbed by furniture, carpets, curtains, clothing, toys, and other items that children come into contact with and even put in their mouths. Due to the influence of illusion and the age of 'Kali', we have forgotten our eternal identity as servants of the Divine Couple, Sri Sri Radha Krishna, and we are interested only in our pleasure regardless of the damage we do to other innocent people.

Nowadays what we are distracted by the influence of illusion, taking us away from Supreme Lord and making us full of distress even though we have many conveniences and comforts afforded by modern technology. ... The nature of living entities is to serve. If we are not serving the Lord, then we will have to serve somebody. Today people are simply becoming servants of their senses. For sake of sense enjoyment they become blind their responsibility to offer respect to the Divine Couple and naturally it is reflecting on all aspects of society with allot of corruption. Now most parents are even running after one after another’s husband or wife and forgot to nurture their children properly creating depression among the children. This is really creating allot of violence in present society. ... We are the eternal servants of the Supreme Personality of Godhead, Śrī Śrī Radha-Krishna. We have to serve Them ... then we will be able to understand what we are supposed to do with our parents, children, and relatives to present society peaceful.