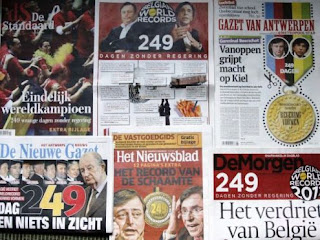 www.telegraph.co.uk - Many would see it as a humiliation, but for Belgium it’s an excuse for a party: the country’s citizens are marking 249 days without a government Thursday, a figure that they are treating as a world record. Deep divisions between Belgium’s squabbling Flemish, Dutch-speaking and Walloon, francophone, political parties since elections last June have meant that the country has remained without a federal government for over eight months. The political impasse breaks a world record set by Iraq after its general election in 2010. The new world record was set as Belgium’s official gazette noted that the total income of federal MPs, whose failure to agree on tax and political reform has driven the crisis, had continued to rise during the crisis. Online campaigners have warned the MPs that if the political impasse drags on until the end of April, when the last government fell, then mass protests will demand “their money back”.

“After all, why should we pay all these people all this money while they’re refusing to do the job we asked them to do?” Derk Jan Eppink, a Flemish centre-right MEP, said that Belgian politicians should be paid welfare benefit rates until a government was formed. “Technically they are unemployed,” he said. Belgium’s dubious new achievement and growing splits between its Flemish and Walloon communities are deeply embarrassing for a country that hosts the European Union.

In Belgium, the country in whose capital headquarters of NATO and the European Union operate, there is no government since the June 13, 2010 and this has already exceeded the time it took to Iraq, where Kurds, Shiites and Sunnis agreed after 249 days a new government in December 2010. To mark the event Belgian student has decided to call that place today, 17 / 2, a special protest movement: “the revolution of french fries,” the national dish as a symbol of unity among all. If we accept our situation and think “I am responsible for all my disobedience”, there is hope of freeing ourselves from the current problems. We should seek for the social balance and harmonize to all without blaming others. 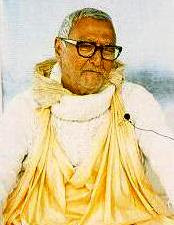 In every subject there is progress and we are not to blame others for whatever comes to us; rather the whole burden of this trouble is ours. No one else is to be blamed. Everywhere there is the hand of the Absolute. When there is a government a hooligan may be detailed but if there is no order or government there criminals can run amok. There is the Absolute government and we cannot escape that law. According to our karma we do things to others and receive the reactions: it is controlled, it is not anarchy. ... In the parliament there is an opposition party but it is there to enhance the work of the main party. In this way the direct and the indirect combine in order to make the government complete. And if that principle is applied everywhere it is not difficult to understand the nature of difference. We are not to try to create another world but to understand what already exists.