AMONG A YOUNGER GENERATION, WHOSE SARI NOW? 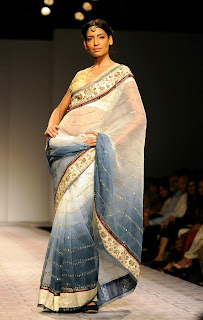 www.washingtonpost.com - It was just past noon when dozens of mothers and daughters at India’s most luxurious mall in New Delhi, sauntered right past the glittering showrooms of Jimmy Choo and Louis Vuitton and into a brunch celebrating the sari. India’s supercharged economy has brought a parade of posh international designers in the Indian capital that offers miniskirts and skinny jeans to one of the world’s largest markets. But the emblem of Indian glamour is in the throes of a comeback, and these women had come to the DLF Emporium mall to attend “sari school.” They hoped to learn some of the 108 ways to drape a sari from the grand aunty of the garment: Rta Kapur Chishti, a textile historian and sari stalwart.
Noting the demise of the kimono in Japan and the Chinese obsession with global brands, many Indian designers consider saving the sari a point of cultural pride, said Chishti. The young are re-igniting the spark of interest in the traditional garb. There are more than a hundred ways to drape a sari say the designers. They are celebrating the fact that the sari, once old, is the new new in these days. The India media have speculated that the fashionable Michelle Obama will don a sari when she and President Obama visit India next month, but the White House has yet to comment.

This news says that the emblem of Indian glamour is in the throes of a comeback, as young women attend draping classes and many designers put a modern spin on the traditional women garment. It is very beautiful to see that young generations are celebrating the glorious sārī. There are many stories in which the sārī is mentioned in Vedic stories, but the pastime of the Mahabharata, when the pure devotee Draupadi is saved from being stripped naked in front of the assembly of the Kurus, is always fresh and exciting, and you never become tired of reading it again and again. 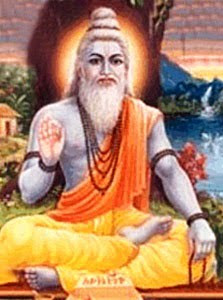 The shameless Duhshasana then began to pull at the upper garments of Draupadi, and Draupadi tried to stop him while looking in the direction of her husbands. When she saw that they could do nothing to help her, she took shelter of the Supreme Personality of Godhead, who is the only one who can give shelter in all circumstances. She threw her hands into the air praying, “O Govinda, O all pervading Lord of the universe, O Krishna, O Keshava, do You not see that I am being humiliated by the Kauravas. O husband of the goddess of fortune, O Lord of Vraja, You are present wherever Your devotees are singing Your glories. I surrender myself unto you! Please save me!” Upon hearing the words of Draupadi, Lord Krishna, the Supersoul in everyone’s heart, immediately offered protection to His devotee. Draupadi stopped trying to resist the advances of Duhshasana and fixed her mind at the lotus feet of Lord Krishna. ... The sinful demon was pulling at her clothes, but each time he pulled, the cloth was getting longer. The more he pulled, the more cloth there was, and soon there was a huge pile of cloth on the floor, enough for hundreds of sārīs. The kings present in the assembly began to applaud Draupadi and chastised the son of Dhritarastra with harsh words.