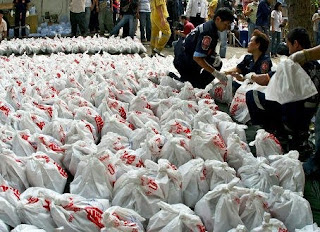 (RTTNews) - Police in Thailand said Friday that they have discovered the remains of more than 2,000 fetuses hidden in a Buddhist temple in the country’s capital city of Bangkok. Police discovered remains of the fetuses wrapped in white plastic bags in the temple’s mortuary. The fetuses are believed to have been collected from illegal abortion clinics in the city. Thai authorities were alerted to the remains of the fetuses hidden in the Wat Phai Ngern temple in Bangkok on foul smell emanating from the mortuary after the furnace broke down. Police have since arrested two temple workers and charged them with hiding the fetuses inside the temple’s refrigerated mortuary. A woman was also arrested, who has confessed to being paid money for each fetus she collected from illegal abortion clinics and delivered to the temple.

Abortion is illegal in Thailand except in cases when delivery would harm the mother or the pregnancy resulted from rape.
An undertaker in Bangkok told police officers investigating complaints of an overwhelming stench that the fetuses were supposed to have been cremated, but that he had begun to store them in the mortuary after the temple’s crematorium broke down, according to local news reports.
He said he poured gasoline around them to mask the odor, and finally when the numbers grew too large, he dug a pit to bury them. But neighbors complained, and the stored fetuses were discovered this week.

The remains of more than 2,000 foetuses, thought to be from illegal abortions, have been found at a Buddhist temple in Thailand. Police were alerted by a terrible smell after the temple's furnace broke down. Two temple workers and a woman believed to have been paid to collect and dispose of foetuses from illegal abortion clinics have been arrested. The Vedic scriptures tell us that life is present from the moment of conception, so abortion is really a murder, although many people realize this, they voluntarily decide to ignore this fact. This is the condition of our current "advanced" civilization.

Real life means you have to minimize your bodily activities so that you can save time and devote for spiritual understanding. That is real life. And the present civilization based on bodily concept of life is animal life. It is not civilized life. ... So this killer of baby within the womb, so the result will be that this man who is, I mean to say, indulging in abortion, he’ll be put into the womb, and somebody will kill him. And as many wombs or babies he has killed, he’ll have to take so many lives and being killed. So much so that it will be rather impossible for him for hundreds of years not to see the light. He’ll remain in the womb and being killed. Does not know the nature’s law. One cannot violate the nature’s law. You can violate the state law. Suppose you kill somebody, you can escape by trick. But you cannot escape nature’s law. As many times you have killed, so many times you have to be killed within the womb. This is nature’s law.