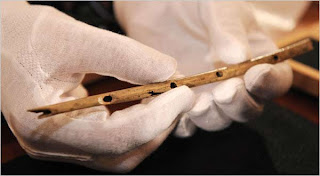 Science correspondent, BBC News - Scientists in Germany have published details of flutes dating back to the time that modern humans began colonising Europe, 35,000 years ago.

The flutes are the oldest musical instruments found to date. The researchers say in the Journal Nature that music was widespread in pre-historic times. The find brings the total number of flutes discovered from this era to eight, four made from mammoth ivory and four made from bird bone. 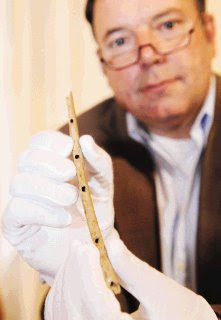 Music, they suggest, may have been one of a suite of behaviours displayed by our own species which helped give them an edge over the Neanderthals. "Music was used in many kinds of social contexts: possibly religious, possibly recreational - much like we use music today in many kinds of settings." The team from Tubingen University have published details of three flutes found in the Hohle Fels cavern in southwest Germany.

The cavern is already well known as a site for signs of early human efforts; in May, members of the same team unveiled a Hohle Fels find that could be the world's oldest Venus figure.

"Music could have contributed to the maintenance of larger social networks, and thereby perhaps have helped facilitate the demographic and territorial expansion of modern humans relative to a culturally more conservative and demographically more isolated Neanderthal populations," they wrote.

WHAT DO THE VEDIC TEACHINGS TELL US?
The divine sound of Śrī Krishna's flute
has manifested Gayatri, the mother of the Vedas

The trees in Vrindāvana are wish-fulfilling trees. The land is made of touchstone, and the water is nectar. Words are musical vibrations, and all movements are dancing. The flute is the Lord's constant companion ... The vibration of Krishna's flute is the origin of the Vedic hymns. Lord Brahmā, who is seated on a lotus flower, heard the sound vibration of Krishna's flute and was thereby initiated by the Gāyatrī mantra.

In this abode, the Lord is served by hundreds of thousands of goddesses of fortune (Lakshmīs), and He is called Govinda, the primal Lord and the cause of all causes. The Lord is accustomed to blow His flute (venum kvanantam). His transcendental form is the most attractive in all the worlds — His eyes are like lotus petals, and the color of His body is like the color of clouds. He is so attractive that His beauty excels that of thousands of Cupids.

Srila A.C. BV Swami Prabhupada:
"The Bhagavad-gita As It Is - Purport in Chapter 8 - Verse 21"

We should not consider Krishna's form to be imagined by some artist. He is described in the Vedas as venum kvanantam aravinda-dalāyatāksham [Bs. 5.30]. He plays a flute, and His eyes are like the petals of a lotus flower. He wears a peacock feather, and His complexion is very beautiful, like a dark cloud. He is so beautiful that He attracts many hundreds of thousands of Cupids (kandarpa-koti-kamanīya-viśesha-śobham). These are descriptions of Govinda found in the śāstras. (Brahma-samhita : 5.30).