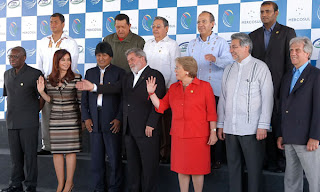 PARAGUAY (Télam) - The Mercosur summit begins with the participation of its four full members and of a fifth country that has applied for full membership. At least ten chiefs of state are scheduled to participate in this Mercosur summit which is hosted by Paraguay. During the summit Paraguay will hand the Mercosur rotating chair to Uruguay for the next six months. "Presidents from Mercosur full members, Argentina, Brazil, Uruguay and associate members, Chile and Bolivia have confirmed their participation," said Paraguyan Foreign Affairs minister Hector Lacognata. Venezuela's president Hugo Chavez has also been announced in Asunción.

Chavez requested incorporation as a full member in 2006, and was quickly approved by the congresses of Argentina and Uruguay. However the Venezuelan request is still pending approval from the Brazilian and Paraguayan legislative branches. This summit is held at a time when Mercosur is undergoing some problems and shows stagnation regarding such important issues as the incorporation of Venezuela as full member, or the adoption of a common Customs Code.

Other new issues will also be part of the agenda, as the Influenza A epidemic affecting the region, and also a resolution condemning the Honduran coup d’etat is also expected. The defacto regime has so far only been recognized by Israel and Taiwan. Paraguay and Uruguay are expected to make strong presentations during the summit given the growing difficulties to access the Argentine and Brazilian markets. In anticipation of the summit the Paraguayan government held a round of meetings where the different sectors of the economy discussed Mercosur, achievements and shortcomings. Mercosur was formally launched in March 1991, precisely in Asuncion.

WHAT DO THE VEDIC TEACHINGS TELL US?
Politics involves accepting one group of men as enemies and another group as friends. Everything in politics is based on this philosophy, and the entire world, especially at the present, is engrossed in it. The public is concerned with friendly countries and friendly groups or enemy countries and enemy groups, but as stated in Bhagavad-gītā, a learned person does not make distinctions between enemies and friends. Devotees, especially, do not create friends and enemies. A devotee sees that every living being is part and parcel of Krishna (mamaivāmśo jīva-bhūtah).
mamaivāmśo jīva-loke
jīva-bhūtah sanātanah
manah-sasthānīndriyāni
prakriti-sthāni karsatī

"The living entities in this conditioned world are My eternal fragmental parts. Due to conditioned life, they are struggling very hard with the six senses, which include the mind." - (Bhagavad-gītā 15.7)