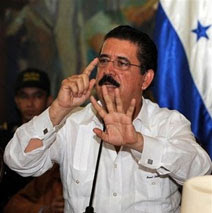 TEGUCIGALPA (Reuters) – The Honduran army ousted and exiled leftist President Manuel Zelaya on Sunday in Central America's first military coup since the Cold War, triggered by his bid to make it legal to seek another term in office.

U.S. President Barack Obama and the European Union expressed deep concern after troops came for Zelaya, an ally of socialist Venezuelan President Hugo Chavez, around dawn and took him away from his residence. He was whisked away to Costa Rica.

Zelaya, who took office in 2006 and is limited by the constitution to a four-year term that ends in early 2010, had angered the army, courts and Congress by pushing for an unofficial public vote on Sunday to gauge support for his plan to hold a November referendum on allowing presidential re-election. Speaking on Venezuelan state television, Chavez -- who has long championed the left in Latin America -- said he had put his troops on alert over the Honduran coup and would do everything necessary to abort the coup against his close ally.

Democracy has taken root in Central America in recent decades after years of dictatorships and war, but crime, corruption and poverty are still major problems. Zelaya said the coup smacked of an earlier era. The global economic crisis has curbed growth in Honduras, which is heavily dependent on remittances from Honduran workers abroad. Recent opinion polls indicate public support for Zelaya has fallen as low as 30 percent. Honduras is a major drug trafficking transit point.

WHAT DO THE VEDIC TEACHINGS TELL US?
This process of chewing the chewed (punah punas carvita-carvananam) will never make human society happy.

If the government is unsteady and unregulated - (arajaka-bhayam) - there is danger of fear for the people. At the present moment this danger always exists because of government by the people. Here we can see that the great sages got a son from Nimi's material body to guide the citizens properly, for such guidance is the duty of a kshatriya king. A kshatriya is one who saves the citizens from being injured. In the so-called people's government there is no trained kshatriya king; as soon as someone strong accumulates votes, he becomes the minister or president, without training from the learned brāhmanas expert in the śāstras. Indeed, we see that in some countries the government changes from party to party, and therefore the men in charge of the government are more eager to protect their position than to see that the citizens are happy.