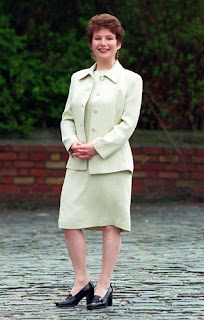 LONDON - guardian.com.uk. The government has seen a string of resignations this week following calamitous revelations about expenses claimed by MPs on all sides of the House of Commons.

The latest resignation, on the eve of a crucial election for the Labour party, by Communities Secretary Hazel Blears only adds to fire which seems to be burning around Gordon Brown's embattled government. Yesterday it emerged that three more ministers, including Cabinet Office Minister Tom Watson, Children's Minister Beverely Hughes and even the Home Secretary Jacqui Smith.

In addition four MPs were barred by the party from standing at the next election after revelations about their expenses were scrutinised by a special committee of the Labour party. Theresa May, Conservative Shadow Work and Pensions Secretary has said that a general election was now essential and that the government was proving incapable of running the country. Meanwhile Liberal Democrat leader Nick Clegg claimed the government was in its "death throes". Brown has been plagued by calls to resign over the course of his premiership by his enemies, but this morning even the normally Labour supporting Guardian newspaper called on the Labour party to "cut lose" the Prime Minister as the only hope of saving itself.

The mass resignations will not do the party any good as it heads into the European elections tomorrow. Labour was already expected to perform poorly but a poor performance combined with the resignations could add to calls from within the party to act against the Prime Minster, who has so far managed to survive the worst his critics can throw at him.

World monarchy has failed ever since kings began to satisfy their personal senses with the taxes accumulated from the citizens. Of course, whether the system is monarchy or democracy, the same corruption is still going on. At the present moment there are different parties in the democratic government, but everyone is busy trying to keep his post or trying to keep his political party in power. The politicians have very little time to think of the welfare of the citizens, whom they oppress with heavy taxes in the form of income tax, sales tax and many other taxes — people sometimes have eighty to ninety percent of their income taken away, and these taxes are lavishly spent for the high salaries drawn by the officers and rulers. Formerly, the taxes accumulated from the citizens were spent for performing great sacrifices as enjoined in the Vedic literature. At the present moment, however, almost all forms of sacrifice are not at all possible; therefore, it is recommended in the śāstras that people should perform sańkīrtana-yajña. ... This process can be accelerated with the cooperation of state administrators and those who are producing the country's wealth. Simply by liberal distribution of prasāda and sańkīrtana, the whole world can become peaceful and prosperous.