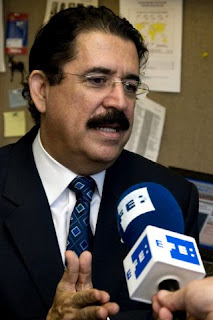 TEGUCIGALPA, Honduras (The Associated Press) - A top diplomat said today he is heading to Honduras to demand the return of the president toppled at gunpoint – a mission he said is likely to meet rejection, bringing diplomatic and economic punishment for the impoverished Central American nation.

The head of the Organization of American States, Jose Miguel Insulza, said he plans to travel to Honduras on Friday to insist on the restoration of President Manuel Zelaya, who was ousted in a coup Sunday. The interim government of Roberto Micheletti has so far shown little willingness to do so, arguing that the army acted legally – on orders of Congress and the Supreme Court – when it raided Zelaya's house amid the rattle of gunfire and deported him, still in his nightshirt.

The OAS says it will suspend Honduras if Zelaya isn't back in office by Saturday, bringing sanctions that could block international aid to one of the poorest nations in the hemisphere.Nations around the world have promised to shun Micheletti, who was sworn in after the Sunday coup, and the nation already is suffering economic reprisals. Neighbouring countries have imposed trade blockades, major lenders have cut aid, the Obama administration has halted joint military operations and all European Union ambassadors have abandoned the Honduran capital.

WHAT DO THE VEDIC TEACHINGS TELL US?
In this material world, every living entity desires some future happiness, which is exactly like a mirage in the desert. Where is water in the desert, or, in other words, where is happiness in this material world? As for this body, what is its value? It is merely a source of various diseases. The so-called philosophers, scientists and politicians know this very well, but nonetheless they aspire for temporary happiness. Happiness is very difficult to obtain, but because they are unable to control their senses, they run after the so-called happiness of the material world and never come to the right conclusion.
Srimad Bhagavatam - Canto 7 - Chapter 9. 25

There is a song in the Bengali language which states, "I constructed this home for happiness, but unfortunately there was a fire, and everything has now been burnt to ashes." This illustrates the nature of material happiness. Everyone knows it, but nonetheless one plans to hear or think something very pleasing. Unfortunately, all of one's plans are annihilated in due course of time. There were many politicians who planned empires, supremacy and control of the world, but in due time all their plans and empires — and even the politicians themselves — were vanquished. Everyone should take lessons from Prahlāda Mahārāja about how we are engaged in so-called temporary happiness through bodily exercises for sense enjoyment. All of us repeatedly make plans, which are all repeatedly frustrated. Therefore one should stop such plan making.
Srila A.C. BV Swami Prabhupada:
"El Srimad Bhagavatam - Purport in Canto 7 - Chapter 9 . 25"
Publicado por dasavatara das en 8:04 PM