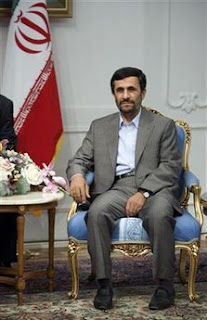 TEHRAN (Reuters) - Iranian President Mahmoud Ahmadinejad has come under fire from many leading hardliners for appointing controversial figure Esfandiar Rahim Mashaie as his new first vice-president, Iranian media reported on Sunday. Mashaie, previously one of several vice presidents and in charge of a culture and tourism body, created a storm in 2008 by saying Iran was friendly with everyone, even the people of its sworn foe Israel.

In rare public criticism, Ayatollah Ahmad Khatami, an Ahmadinejad ally and member of the top legislative body, said Ahmadinejad had shown "a twisted face to clerics and elites" by appointing Mashaie last Thursday. "Ahmadinejad should not challenge conservatives with such decisions. I request the President to replace him before more criticisms are made," the hardline cleric was quoted as saying by the Khorasan newspaper. Many hardline lawmakers and clerics, including several top clerics, had called on the president to dismiss Mashaie for his comments. Ahmadinejad remained defiant, saying Mashaie's comments had been "misrepresented." Mashaie also came under fire for hosting a ceremony in November where women in traditional dress carried in Muslim's holy book, the Koran, to music, an action deemed insulting to Koran. Lawmaker Hamid Rasai said Iranian society was very sensitive over Mashaie, a close relative to Ahmadinejad through marriage.

Ahmadinejad was re-elected in a June presidential vote, which stirred the largest display of internal unrest in Iran, the world's fifth biggest oil exporter, since the 1979 revolution and exposed deep rifts in its ruling elite. Defeated moderate candidates say the vote was rigged in favor of Ahmadinejad, who has called the vote "the world's freest election." But there are still many hardliners who back him such as Ayatollah Mohammad Yazdi who said in remarks published on Saturday that the Iranian government drew its legitimacy from "the Almighty God."

WHAT DO THE VEDIC TEACHINGS TELL US?
Since the population is fallen in these democratic days, they can only elect a person in their category, but a government cannot run very well when it is run by sūdras. The second class of men, known as ksatriyas, are especially meant for governing a country under the direction of saintly persons (brāhmanas) who are supposed to be very intelligent. In other ages — in Satya-yuga, Tretā-yuga and Dvāpara-yuga — the general populace was not so degraded, and the head of government was never elected. The king was the supreme executive personality, and if he caught any ministers stealing like thieves and rogues, he would at once have them killed or dismissed from service. As it was the duty of the king to kill thieves and rogues, it was similarly his duty to immediately kill dishonest ministers in government service. By such strict vigilance, the king could run the government very well, and the citizens would be happy to have such a king.