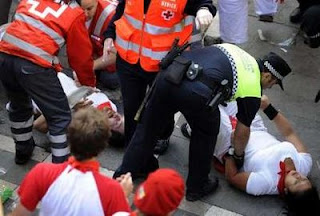 PAMPLONA, Spain – A charging bull gored a young man to death Friday at Pamplona's San Fermin festival, the first such fatality in nearly 15 years. Nine others were injured in a particularly dangerous and chaotic chapter of the running of the bulls. The man was gored in the neck and lung during a run in which a rogue bull separated from the pack, which is among the worst things that can happen at Spain's most popular fiesta. Three other people were gored, and six people suffered bumps, bruises and other lesser injuries, said the director of Virgen del Camino Hospital.

The last fatal goring at the running of the bulls claimed the life of 22-year-old American Matthew Tassio in 1995. In 2003, a 63-year-old Spanish man, Fermin Etxeberri, was trampled in the head by a bull and died after spending months in a coma. Friday's death raises to 15 the toll since record-keeping began in 1924. Fatalities are relatively rare and when one occurs, it serves as a reminder that amid all the street parties and revelry associated with San Fermin, running with fighting bulls weighing 1,300 pounds (600 kilos) or more on cobblestone streets packed with humanity is a life-risking exercise.

This run, the fourth of eight held at San Fermin, was by far the most perilous of this year's festival. The last three runs were comparatively placid affairs, with no serious injuries. The six bulls covering the half-mile (850-meter) course with six accompanying steers tend to mind their own business and keep running as long as they stay in a pack. A bull that gets separated is more likely to get frightened and aggressive, and that is what happened Friday. A brown, 1,130-pound (515-kilogram) bull named Cappuccino fell early in the run and ended up on its own.

WHAT DO THE VEDIC TEACHINGS TELL US?
The bull and the cow are the symbols of the most offenseless living beings because even the stool and urine of these animals are utilized to benefit human society.