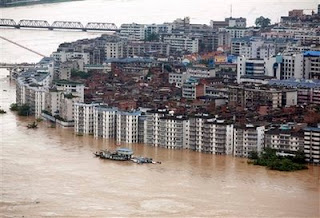 BEIJING – (Associated Press) In the central province of Hunan, floods have killed eight people and forced 140,000 to relocate since rain began pounding the region on Wednesday, the Xinhua News Agency said.

Five people have died in southeastern Fujian province, two others were missing, and 22,000 people have been evacuated, Xinhua said Saturday. Another three people died and four were missing in Jiangxi province of the Guangxi region. Another 80,000 people were forced from their homes. Rains caused 287 rural houses in Guangxi to topple and inundated Rongshui county causing the Rongjiang river to overflow its banks. More than 70,000 people in the region have been moved, the news agency said. The county government estimated damage at 210 million yuan ($31 million). Floodwaters along a major commercial thoroughfare in Rongshui were more than 8 feet (2.5 meters) deep, a CCTV report said Sunday.

It said it was the highest water level the county has seen in a decade. The signboards of restaurants and shops along the street were all that could be seen above the water. Mattresses, household items and other debris drifted in the water, passing residents on wooden rowboats as people peered out from second-floor balconies and windows. The rain destroyed a 44-foot (13-meter) section of a dike near the base of the Kama Reservoir in Guangxi, Xinhua said. About 15,000 people who lived downstream from the dam were moved to safety and were now living in more than 1,000 tents, the national flood control office said in a statement Saturday. Local authorities were distributing relief materials and trying reinforce the reservoir dam, it said. The flood control office referred questions to the State Council, but calls there rang unanswered Sunday.

WHAT DO THE VEDIC TEACHINGS TELL US?
Material life is not very happy because
we are always fearful of something
There are many events in nature that cause fear. There are great cyclones and tornadoes. There is excessive heat and excessive rain. There is flood and famine and war. Yet people are thinking of being happy on this planet. Modern scientists say that there are no demigods and that there is no God, that all events are being carried out by nature. It is true that nature is working, but nature, after all, is nothing but matter. Matter cannot work without being directed by a living being. We cannot say that matter works independently. In the ocean we always see that there are great waves moving. Water is dull matter, but the air is pushing these great waves and dashing them onto the earth.

Scientists say that nature works in this way and that, but nature is not independent. We receive information from authoritative śāstras that nature is moving under the direction of the demigods. So we cannot say that these processes are automatically taking place. Scientists admit that nature is working in a wonderful way, but, after all, nature is not under their control. The scientists may accept or defy Krishna, but they cannot defy the activities of nature. Everyone is subordinate to nature. Nature, however, is working under the direction of God; therefore everyone is subordinate to God.
Srila A.C. BV Swami Prabhupada:
"Teachings of Lord Kapila - Chapter 17 - Verse 42"
Publicado por dasavatara das en 6:48 AM