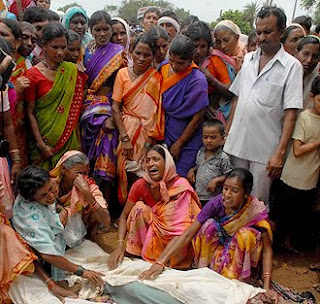 Rescuers saved four passengers and two crew from the Wainganga River after the accident late Saturday night, said police Superintendent Suresh Sagar. Eight other women are still missing. After seeing a massive bolt of lightning, the women — poor farm laborers on their way home from work — panicked and the ensuing chaos upset the boats.

The boats overturned in the Bhandara district of Maharashtra state, about 575 miles (925 kilometers) northeast of the state capital of Mumbai. Apparently, the incident occurred yesterday when two boats carrying 35 women labourers, who were returning home after finishing sowing work in a field.It's not clear why all of the passengers were women. But in many parts of India, women make up most of the farm workers. Boat accidents are common in India, where many vessels are unsafe and overloaded.

WHAT DO THE VEDIC TEACHINGS TELL US?
As long as we are in this material world, there must be calamities because this is the place of calamity. But even with calamities our business should be to develop our Krishna consciousness, so that after giving up this body we may go back home, back to Krishna.

On the Battlefield of Kuruksetra, Arjuna said to Krishna, "Whatever You are saying is all right. I am not this body. I am a soul, and this is also true of everyone else. So when the body is annihilated, the soul will continue to exist. But when I see that my son is dying or my grandfather is dying and that I am killing, how can I be solaced simply by knowing that they are not dying, but that only their bodies are changing? I am accustomed to thinking of them with affection in terms of the body, and so there must be grief and suffering." Krishna did not deny what Arjuna said. "Yes," He replied. "That's a fact. Because you are in the bodily concept of life, there must be suffering. So you must tolerate it, that's all. There is no other remedy."

As mentioned in Bhagavad-gītā (2.14), Lord Krishna told Arjuna: "O son of Kuntī, the nonpermanent appearance of heat and cold, happiness and distress, and their disappearance in due course, are like the appearance and disappearance of winter and summer seasons. They arise from sense perception, O scion of Bharata, and one must learn to tolerate them without being disturbed."
Srila A.C. BV Swami Prabhupada:
"Teachings of Queen Kuntī – Chapter 8"
Publicado por dasavatara das en 12:47 AM