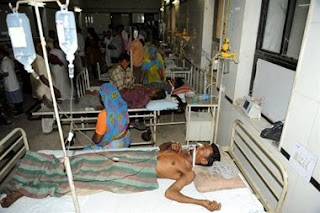 AHMADABAD, India — At least 86 people, mostly poor workers living in slums, have died over the past few days after drinking tainted home-brewed liquor in western India, an official said Thursday. The death toll has risen precipitously since people first fell ill Monday after a night of drinking. Seventeen people died in hospitals on Thursday; others have fallen dead in the streets. Another 140 people are in serious condition and being treated in hospitals in Ahmadabad, the main city in Gujarat state, said Deputy Medical Superintendent Mukesh Patel.

Deaths from drinking illegally brewed cheap alcohol are common in India, where few people can afford licensed liquor. Known locally as desi daru (pronounced THEY-see DAA-roo), illicit liquor is often spiked with pesticides or chemicals to increase its potency.In Gujarat, the problem is worse because the state law prohibits the sale of all liquor. Gujarat is the home state of India’s independence leader, Mohandas Gandhi, who was a strong advocate of prohibition.

Police have arrested 32 people for allegedly manufacturing and selling the tainted liquor in the city, said a police officer at a central police office. He spoke on condition of anonymity as he was not authorized to talk to reporters. Authorities asked a retired judge to investigate the deaths and suspended six police officers for negligence of duty, said state Home Minister Amit Shah.Most of the victims lived in the Majur Gam and Odhav localities of Ahmadabad — slums inhabited by thousands of mostly poor laborers. In 1980, 128 people died after drinking tainted liquor in Majur Gam.

Just today we have seen in the newspapers of Bombay that the government is going to repeal its prohibition laws. Ever since Gandhi's noncooperation movement, Bombay has been kept dry and has not allowed its citizens to drink. But unfortunately the citizens are so clever that they have increased illicit distillation of liquor, and although not being sold publicly in shops, liquor is being sold in public lavatories and similar abnormal places. Unable to check such illicit smuggling, the government has decided to manufacture the liquor at cheaper prices so that people can have their supply of intoxication directly from the government instead of purchasing it in public lavatories.

The government failed to change the hearts of the citizens from indulging in sinful life, so instead of losing the taxes they collect to inflate the treasury, they have decided to manufacture liquor to supply to the citizens who hanker after it.