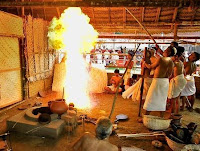 www.dailymail.co.uk - A 4,000 year old fire ritual conducted in the remote village in Kerala, India, in April last year has a positive impact on the atmosphere, soil and other environment effects, according to scientists who are now ready with their findings.
The “Athirathram” ritual held on April 4 - 15 at Panjal village in Thrissur district was the focus of a detailed study by a team of scientists led by Prof V P N Nampoori, former director of the International School of Photonics, Cochin University of Science and Technology.
The scientists had focused on the fire ritual’s scientific dimensions and impact on the atmosphere, soil and its micro-organisms and other potential environmental effects. The yagna seems to have accelerated the process of seed germination and also the microbial presence in air, water and soil in and around the region of the fire ritual is vastly diminished, according to a statement released by the Varthathe Trust, who organised the ritual. 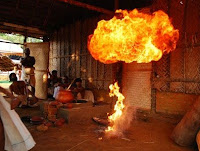 The team had planted three types of seeds - cowpea, green gram and Bengal gram - on all four sides of the ritual venue at varying distances. They found that the growth was better in case of pots kept closer to the fire altar. This effect, the study says, was more pronounced in the case of Bengal gram with growth about 2,000 times faster than in other places. According to Nampoori, sound is a vibration and continuous positive vibrations through chanting, accelerates the process of germination. The study focused on counting bacterial colonies at three locations - within the yagnashala (ritual enclosure), 500 metres and 1.5 kilometres from the yagnasala. Microbial analysis made before, during and four days after the yagna (fire ritual) revealed that the air in the vicinity of the yagnashala was pure and had very low count of microbe colonies.
The research team also found that microbial activities in the soil and water around the yagnashala were remarkably less compared to normal ground. The scientific team members were supported by Zarina (Research Scholar, CUSAT), Ramkumar (Biotechnologist), Asulabha (Biotechnologist) and a number of postgraduate, graduate and school students.

The “Athirathram” ritual usually held to propagate universal peace and harmony, was first documented 35 years ago by US - based Indologist Frits Staal, currently Emeritus Professor of Philosophy and South and Southeast Asian Studies at the University of California, Berkeley. Studies are on to find out if positive changes on the atmosphere are transitional or permanent. Further research could prove that some bio-amplifier phenomenon is generated in the atmosphere because of the ritual. “The findings would not only help dispel superstitious notions associated with Vedic rituals but also help in continuation of such tradition for the betterment of nature and the environment,” said Prof V P N Nampoori.

Athirathram is an ancient Vedic ritual of twelve days, consisting of homas (offerings into a consecrated fire) and Vedic chanting. Athirathram is considered as the ultimate invocation of Vedic Scriptures for universal harmony. The objective of Athirathram is to promote universal harmony, marked by peace, solidarity, prosperity and spiritual enlightenment, and is regarded as extremely relevant today, with the world witnessing a marked rise in discontentment, violence and strife. Athirathram cuts through all barriers - caste, religion, race, colour and sex - making it a true union of humanity as one to invoke the bounty of Universal Energy to promote solidarity and peace. It is believed that the 12-day ritual will help cleanse the atmosphere; purify the soul and mind of all participants and visitors at the event. The choice of Panjal village (in Thrissur district in the state of Kerala, India. ) as the is in line with geographic and Vaasthu principles.