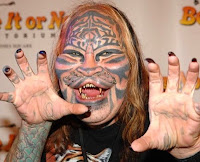 www.christianpost.com - Dennis Avner, the world record holder for the largest number of body modifications undertaken, was found dead in Nevada on Nov. 5. Rumours have spread that the man, who had spent his life attempting to look like a female cat, may have committed suicide. Born with the Native American name Stalking Cat, Avner underwent over 10 drastic surgical procedures in order to make his face appear more like a cat.
The surgeries included altercations to his forehead, nose, cheeks, and the splitting of his lips. Avner also covered his face in tattoos and acquired piercings around his lips and eyebrows to imitate the look of whiskers. The 54-year-old former U.S. Navy sonar technician was found dead in his Nevada home on Nov. 5. Although the cause of his death has still not been identified, there has been some speculation that indicates he may have killed himself. 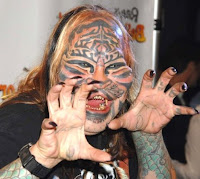 Avner was at current working as a programmer and technician, friend Shannon Larratt wrote on his site, Mod Blog. Larratt, a former editor and publisher of BME, stated that was both “wonderful and complex person” though “he was at times as troubled as he was remarkable.” Avner was allegedly inspired to transform himself into a cat following a discussion with a Native chief who inspired him to “follow the ways of the tiger” according to Mail Online.
Avner was a descendent of Huron, an indigenous native tribe whose traditional belief is to adopt the physical form of one's totem. Avner had a feline totem and chose to alter his body to that of a female cat, “blurring and exploring the gender line as much as the species line,” according to Larratt. Larratt also suggested that Avner had faced money troubles and was fond of stating that he “found fame, but never fortune.” A number of Avner's fans shared their blessings and prayers, stating that he was an inspiration to many.

The “Stalking Cat” man was found dead in his Tonopah home of an apparent suicide. Fifty-four-year-old Dennis Avner was a Native American U.S. Navy veteran. For the past several decades, he has dedicated his life to slowly taking on more and more characteristics of a cat. His goal was to transform himself into a tiger. Avner’s operations have included bifurcation (splitting) of his upper lip, surgical pointing of the ears, silicone cheek and forehead implants, tooth filing, tattoos, facial piercing which resemble feline whiskers, and a mechanical tail. The cause of death has not been revealed but it is believed that he took his own life. The spirit soul, due to contact with material nature, gets different types of bodies, according to the different desires developed under the material conception of life. 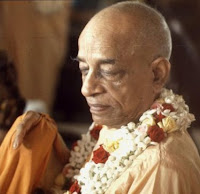 “The living entity, thus taking another gross body, obtains a certain type of ear, eye, tongue, nose and sense of touch, which are grouped about the mind. He thus enjoys a particular set of sense objects.” (BG 15.9)
In other words, if the living entity adulterates his consciousness with the qualities of cats and dogs, in his next life he gets a cat or dog body and enjoys. Consciousness is originally pure, like water. ... But consciousness is changed according to the association of the material qualities. Real consciousness is Krishna consciousness. When, therefore, one is situated in Krishna consciousness, he is in his pure life. But if his consciousness is adulterated by some type of material mentality, in the next life he gets a corresponding body. He does not necessarily get a human body again; he can get the body of a cat, dog, hog, demigod or one of many other forms, for there are 8,400,000 species.


Śrīla A. C. Bhaktivedanta Swami Prabhupāda :
“Bhagavad-gītā As It Is” - 15.9
Chapter 15: “The Yoga of the Supreme Person”
Bhaktivedanta VedaBase Network

Did you know that you can create short urls with Shortest and receive money for every click on your short urls.