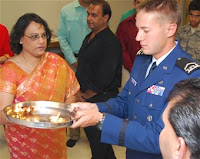 USA - Air Force Academy Public Affairs - A group of 10 cadets and 20 other guests attended a Hindu service in the Cadet Chapel's multipurpose room Sept. 21 to honor one of the major Gods of the Hindu pantheon, marking the first Hindu service in the Cadet Chapel in recent memory.
The Academy chaplain's office provided support for the event, which was led by Hindu priests with the Sri Venkateswara Temple of Colorado. Cadet 3rd Class Anish Bachu of Cadet Squadron 09 called the event historic and thanked the chaplains, particularly Chaplain (Col.) Robert Bruno and Chaplain (Lt. Col.) James Brantingham, for their support. “My mother approached Brantingham a few weeks ago regarding having a service for the Hindu cadets, and he immediately agreed,” Bachu said. “The chaplains were very excited for the Hindu cadets, and my chain of command was very open and encouraging as well.”

The Ganesha Chaturthi service was held to observe the birthday of the Hindu God Ganesha, the remover of obstacles, according to Hindu theology. “Hindus typically pray to Ganesha before starting projects,” Bachu explains, “so the chance to observe His birthday early in the academic year was special.”
Bachu's mother, Mythili Bachu, is the chairperson of the Council of Hindu Temples of North America and president of the United Hindu Jain Temples of Washington, D.C.  She worked with the Academy's chaplains to set up the observance. “I felt very satisfied with the whole program and very much grateful to the leadership for providing an opportunity for Hindu cadets to pray to our gods,” she said. “I am happy to see that we can have an annual service for all the Hindu cadets at the Academy. This is a great start for Hindus in the United States.”

Cadets from the US Air Force Academy and very special guests celebrate the birthday of Ganesha, one of the major gods of the Hindu pantheon, during a Sri Ganesh Chaturthi which took place last september in the Air Force Academy Cadet Chapel. “While the service was short, it was a good beginning for us Hindus, something we can relate to,” said Cadet 3rd Class Anish Bachu of Cadet Squadron 09. “We hope to see this as an annual event.” Hinduism is one of the world's largest religions, with between 900 million and 1 billion followers. It is also one of the world's oldest religions, with evidence of its existence going back more than 4,500 years. During Ganesh Chaturthi festival, large idols of Lord Ganesh are worshipped in thousands of places. 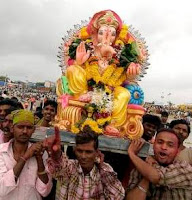 This celebrates the birth of Lord Ganesh, also called Vinayaka, his child form, as he is popularly known in southern India. He is the god of wisdom, prosperity and good luck. He also removes obstacles. Ganesh Chaturthi is celebrated on the fourth day of the lunar month that falls in August-September. ... Ganesh Chaturthi is very popular in the Indian state of Maharasthra. It is the most important of all Mumbai and Pune festivals and is celebrated with great aplomb amongst Marathi community worldwide. On the occasion of the Ganpati festival, a large number of deities are made of all possible sizes and people buy them to keep in their houses as a divine guest for one and a half, five, seven or ten days or twenty one days in exceptional cases after which the image is taken out ceremoniously and disposed of into the river, sea, or well for immersion (Visarjan). ... There is always a long queue for the darshan of this Ganapati and people don’t mind waiting for hours just for glimpse of their favorite God.