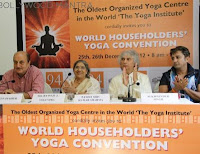 http://www.indiatimes.com - The Yoga Institute, oldest organized centre of Yoga in the world, celebrates the completion of 94 years in Mumbai. On the occasion of its 94th foundation day celebrations, the institute held The World Householders' Yoga convention 2012 December 25 and December 26, 2012 at the Yoga Institute in Santa Cruz East, Mumbai. The panel discussions including leading personalities from the fields of medicine, education, corporate, and media were on three topics - yoga as education for life, life style management and yoga in healthcare management and yoga guide to living life.
The experience centre facilitating programs like Samattvam (means a balanced state of mind) is intended to give householders a chance to know the physical as well as the subtle (mental, emotional and spiritual) effects of Yoga. 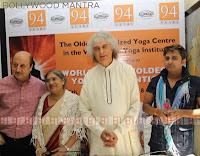 The convention emphasized on recent case studies, sharing insights on ailments like cancer and complications arising due to diabetes and cardiac disorder. It also highlighted a few yogic exercises and sattvic food that can successfully control the various physical and mental ailments. Addressing the need of individuals today, Smt. Hansaji Jayadeva Yogendra, director of institute, said, “The key objective of the Convention is to propagate a simplified form of yoga for the common man and woman.
As Patanjali, the compiler of the yoga sutras, emphasizes on control of the mind which is done on the intellectual as well as emotional level, we want to help each individual in the world to feel true relaxation of body and mind and learn how simple yoga practices helps in gaining clarity of mind and strength of character.” She explains that “Householder Yoga is a simplified form of Yoga for the common man and woman as we believe that a householder does not require the extreme stretch of Hatha Yoga practices.”

Continuing the legacy of Shri Yogendraji, founder of the institute or the heart of modern Yoga renaissance 94 years later, the institute through World Householders' Yoga Convention desires to facilitate an individual to experience the physical, mental and spiritual effects of Yoga and how it can change an individual's life. The two day event included exhibition about the pioneering research done by The Yoga Institute in fields such as Therapeutic Yoga, Yoga Indology and Yoga Education.  The event was graced by the presence of famous personalities like Padma Vibhushan Awardee, Santoor Maestro, Pandit Shiv Kumar Sharma, well-known actor, Anupam Kher, and popular singer, Sukhwinder Singh. Yoga is a science which involves a harmonious blending of the body and mind, aiming toward the highest levels of efficiency in all spheres of activities.

Yoga is basically a system that involves the training of body, mind, and spirit; it is a very integrated program. Often in modern athletic training, the body is exercised but the mind is not attended to. Conversely, in religious or spiritual courses, the physical part is ignored. The ancient concept of yoga recognizes that through a healthy body alone, a healthy mind might be cultivated. A mind, too, needs vigilant supervision and guidance, lest it go astray in a vicious direction. The mind must be fixated to the highest and noblest thoughts of virtuous conduct. Thus, man is groomed to attain excellence in all fields of life. Physical, mental, and spiritual aspects are very methodically coordinated to yield the best possible results. It is the highest stage of development when a person attains spirituality through yoga. One learns to become stabilized in the absolute bliss of the Divine, so he may radiate the beauty and goodness around.

Get all your favorite alcoholic drinks on Duty Free Depot!

All the popular brand name drinks for unbeatable discounted prices.