HALF OF AMAZONIA RAINFOREST
MAY DISAPPEAR IN THE NEAR FUTURE 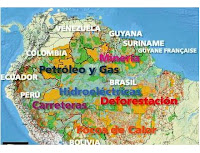 Latinamerica Press - The Amazon Network of Socio-Environmental Geo-Referenced Information, or RAISG, comprised of 11 environmental organizations from Bolivia, Brazil, Colombia, Ecuador, French Guiana, Peru, Suriname, and Venezuela, presented on Dec. 4 in Santa Cruz, Bolivia, the atlas “Amazon rainforest under pressure,” which warns of the dangers the South American Amazon region faces that in the near future could lead to the disappearance of half of the current Amazonian forests. The RAISG has identified a set of six threats to the Amazon rainforest in the last decade: roads, oil and gas, hydroelectric dams, mining, forest fires, and deforestation.
The Amazon region covers 7.8 million km2 shared by Bolivia, Brazil, Colombia, Ecuador, French Guiana, Guyana, Peru, Suriname, and Venezuela. About 33 million people live in this region, including 385 indigenous communities. “The forest sceneries, socio-environmental diversity and fresh water are being replaced by degraded sceneries turned into savannas, drier and more homogeneous zones,” says the atlas.

The deforestation analysis shows that between 2000 and 2010 nearly 240,000 square kilometers (92,000 square miles) of Amazonian forest were deforested. This is equivalent to twice the Ecuadorian Amazon.
The document recommends “to deepen the prospective analysis of the Amazon rainforest, starting with the information generated by the RAISG, to identify the future situation in the topics of: the capture and storage of forest carbon emissions according to the use of the land (protected areas, indigenous territories, and others); new frontiers to extractive economies around water sources (hydroelectric dams or systems for irrigation and drinking water); promotion of regional integration and its implications on infrastructure, energy security, or the movement of populations; strategies for adapting to climate change to reduce socio-environmental vulnerability in the high forests and flood zones of the Amazon rainforest.”

During 2000-2010, 92,000 square miles of Amazon forest were destroyed. “The largest and most complex rainforest on the planet - with at least 10,000 years of human activity - continues to be a place for extraction and/or production of agro-industrial supplies and non-renewable raw materials (commodities of low aggregate value), for national and international markets, which compromises [the rainforest’s] future potential for sustainable development and affects the conservation of living spaces,” RAISG says. Another study from the Universidad Andina, warns that deforestation will likely escalate in other regions of the Ecuadorian Amazon as a result of 13 new oil blocks that were opened for lease last month. We want to thrive… not just survive. Please, no more pain for Mother Earth! 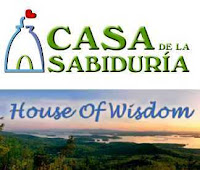 It’s time that humanity reverts to and values a simpler, healthier, and more natural way of life.  Only in this way may we attain true health, harmony, and prosperity.  We are part of the earth, and she is part of us.  The perfumed flowers are our sisters; the cow, horse, and great snake are our brothers. The rivers are our brothers and quench our thirst. The air has priceless value.  We all share the same breath - the beast, the tree, man; all breathe the same air, and it shares its essence with the life that it sustains.  The freshness of the air, the force of the waters, the mighty pine tree, every grain of sand at the beach, every drop of dew in the forest, the sap that runs through the trees, even the sound of the insects sustain and soothe the lives of humankind on this planet.  The biological wellbeing of our earth and the future of mankind are being ruined by the materialistic vision of society.

There is a chance you're qualified to receive a $1,000 Amazon Gift Card.

eToro is the best forex broker for rookie and advanced traders.