NOT ONLY HINDUS REVERED THE COW

WHY BOVINE IS
SEEN AS DIVINE ? 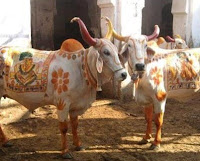 ww.speakingtree.in - The cow enjoys a special place in healing and purification rituals across cultures and faiths, writes Ranjeni A Singh. Every day after lunch and dinner, my mom would sprinkle a solution of water and dried cow dung on the dining table and then clean the surface. I would wince and scoff at the “cleansing” ritual. One day, she sat me down and explained why she did it. “Cow dung contains disinfectants. Both cow dung and cow urine have been used in purifying rituals since the Vedic period,” she said. Kamadhenu or Surabhi, the cow of plenty that gives ceaselessly, rose up from the milky ocean during samudra manthan, when the devas and asuras churned the ocean in search of nectar.
When reading up on other cultures, I found that in China, some Guan Yin worshippers do not eat beef. In ancient Egypt, animal sacrifice was a common practice but this did not include the cow. The Bible describes Lebanon as the land of milk and honey. The beef taboo is fairly widespread in Burma, particularly within the Buddhist community.

And all this while, I was under the impression that only superstitious Hindus revered the cow! Further readings and discussions were instructive on the divine attributes of the bovine, a belief that is common to many religions and cultures. Jewish tradition says that a red heifer or cow heralds the Messianic era, an era of global peace and harmony. Recent scientific research suggests that cow urine could help in treating cancer, diabetes and blood pressure. Indian scientists were awarded a US patent in 2002 for a desi drug formulation composed of cow urine distillate and an antibiotic. The Council of Scientific and Industrial Research’s former director-general R A Mashelkar says, “Ancient Indian texts have recorded the use of go-mutra (cow urine) for therapeutic purposes.”
A Scientific American report says that among all species, cow’s milk is the closest match to human (mother’s) milk. This is because the DNA of the cow is compatible with that of human DNA. So, it does seem, we have close links with the bovine, sometimes extending to the divine.

According to the author of the article, Ranjeni A Singh, the cow is a walking, living, eating, ecosystem. The panchagavya or five products of the cow - milk, curd, ghee-butter, urine and dung - are used in pujas and rites of severe penance. Singh mentions that the ninth chapter of the Vendidad of the Avesta expounds the purificatory power of cow urine. It is declared to be a panacea for all bodily and moral evils. “Milk nourishes children as they grow up, and gobar or cow dung, is a major source of energy in households across India. Cow dung is sometimes added to the materials used to make the tilak that is drawn on the forehead. For us it is an earthy and useful natural product,” says Ramanatha Shastrigal, a Delhi-based priest. Cow's milk is sometimes called “liquid love” in the Ayurvedic shastras, because it's so life-giving, for babies or old men or anybody. 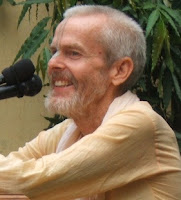 What is the relationship between cow’s milk and love? Milk is very necessary for human life. You can’t manufacture milk or water or grains in a laboratory. No scientists can do that. ... In Maharaja Yushidstira’s time, the cows were grazed freely in the pasture and they would happily give their milk. The milk coming from the cow was actually the love of the cow. The cow gives the milk for the calf out of love. ... The cow's milk is very good for the mind because the cow has more love for her offspring than any other species including humans. The scientists have observed this. ... So that love of the cow, which is more intense than any other mother in the entire creation, is also in her milk, the cow’s milk. And that milk is being given to her baby, so she is giving the baby her love in the form of the milk. ... Previously cows gave milk happily.  Now cows are afraid of the milkman ... because they pull all the milk out and they don’t leave any for the calf.