PORT-AU-PRINCE (Reuters) - A major earthquake hit the impoverished country of Haiti on Tuesday, collapsing buildings in the capital Port-au-Prince and burying residents under rubble. Frantic rescue efforts are underway to free people trapped in the rubble after a massive 7.0 magnitude earthquake hit the Caribbean nation of Haiti. The epicentre of the quake was located inland, just 16 kilometres from the capital, and was a shallow 10km deep, intensifying its impact. The tremor sparked widespread panic as it brought down buildings including the presidential palace, hotels, a hospital and the UN headquarters in the capital of Haiti, Port-au-Prince. The quake was the strongest to hit the country in 200 years and was felt as far away as Cuba. Thousands of people gathered in public squares late into the night, singing hymns and weeping. Many gravely injured people sat in the streets, pleading for doctors. Many resident were forced to abandon the ruins of their homes, and were squatting in sports grounds and open spaces in the hours following the quake. Rescue teams were hampered when communications went down in the minutes after the earthquake struck at 2153 GMT, but efforts free people trapped in the debris continued throughout the night.

Haitian police vehicles as well as those from the United Nations and the Red Cross tried to ferry the wounded to hospital, but progress was slow as chunks of rubble lay strewn across the roads. The death toll was expected to climb into the hundreds, but no official figure has been released so far. One aid worker estimated the quake had killed thousands. Early pictures showed scenes of utter devastation, with bodies pinned under fallen buildings as a pall of grey smoke hung over a part of one city. Dazed residents stared helplessly around them, or rushed to help the injured. "It's really a catastrophe of major proportions," Haiti's ambassador to the United States, Raymond Alcide Joseph, told CNN television. 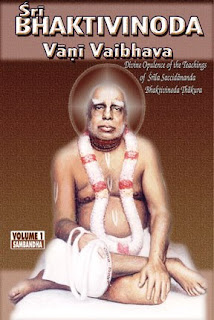 Question 25. Why should we accept the Supreme Lord or His energy? Answer: The rules of material nature are possible by the glance of the Supreme Lord. Such rules are the formation of clouds and then rain, according to the different seasons; earthquakes and the breaking of mountains, caused by heat; and the ebb and flow of the tide, caused by attraction. The heat or attraction can never be independent qualities. Consciousness is like the creator, and qualities such as attraction are only rules. Therefore, it is not reasonable to deny the creator but accept the rules. (Tattva-sutra 22).