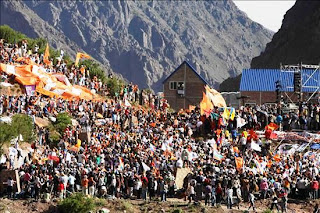 BUENOS AIRES (EFE) - The Global Peace March wrapped up in Punta de Vacas, Argentina on Saturday with hundreds of participants arriving to the foot of the Andean Mountains in the province of Mendoza. The Global Peace March set off with about 100 marchers from Wellington, New Zealand on October 2, the anniversary of Mahatma Gandhi's birth and an international day of peace. The marchers trekked across six continents, covering almost 100 countries in 90 days. Along the course of the trip, they organized conferences and other events to draw attention to nuclear disarmament and stopping the world's armed conflicts. Katalin Harmos, the organizer of the Hungarian section, said that the humanist initiative had started in New Zealand in October last year and participants had covered six continents and their initiative is the first march to circle the earth which calls for "the end of war and nuclear weapons, and the elimination of violence of all kinds," she said. Last week in Chile, some 50,000 Chileans attended the World March for Peace Concert. The March has toured 90 countries and involves many singers, as Pedro Aznar, Cesar Isella, Victorio Menghi and Cristian Soloa of Argentina, Fernando Jimenez (Costa Rica); Dr Krapula band of Colombia; and Inti Illimani Historico, Lucybell, Chancho en Piedra, Florcita Motuda and Sol y Lluvia from Chile. Spokesperson for the Global Peace March Rafael de la Rubia said that the march's relevance was significant after U.S. President Barack Obama received the Nobel Peace Prize. "This seems to be a result with a lot of relevance. Right at the time when, on the other side, there is a President (referring to U.S. President Barack Obama) who has a Nobel prize, who has decided to maintain the same philosophy as always: in order to want peace, we have to organize a war," he said.

Representatives of the five continents spoke in front of the crowd; the Spanish Rafael de la Rubia; Bhairavi Sagar from India; Giorgio Schultze from Italy; Gemma Suzara from the Philippines; Tony Robinson from the United Kingdom; Pía Figueroa and Tomás Hirsch from Chile and Sandra Love from Argentina. These figures connected with peace, philosophy and politics, gave their final message demanding the ending of wars, the dismantling of nuclear weapons and stopping all forms of violence (physical, economic, racial, religious, cultural, sexual and psychological). The march ended with a musical show in which several artists participated. Organizers said Mendoza is proud of the march because 40 years ago the Humanist Movement for Peace and Nonviolence was born in this province of Argentina, led by Mario Luis Rodriguez Cobo, better known as "Silo" who is the founder of Universalist Humanism and the inspirer of the Global March. Silo, a humanist leader, delivered a speech which was translated into seventeen languages, on nuclear disarmament and left a message of Peace, Strength and Joy. The event could be followed live via the Internet, through page www.parquepuntadevacas.org /live.html

This world is limited. When there are many claimants for one limited object, disputes amongst claimants are unavoidable. It is because of this that Indian saints differ from the leaders of the west or from the westernized leaders of our country in their manner of tackling the problem of peace. ... As long as people have the conviction that their only interest lies in material prosperity and sensuous enjoyment, discord cannot be avoided. So long as people do not understand that they are inseparably connected, and until the activities of the people are God-centered, mere sentimentalism or fictitious ideas will not be able to foster real love amongst individuals.